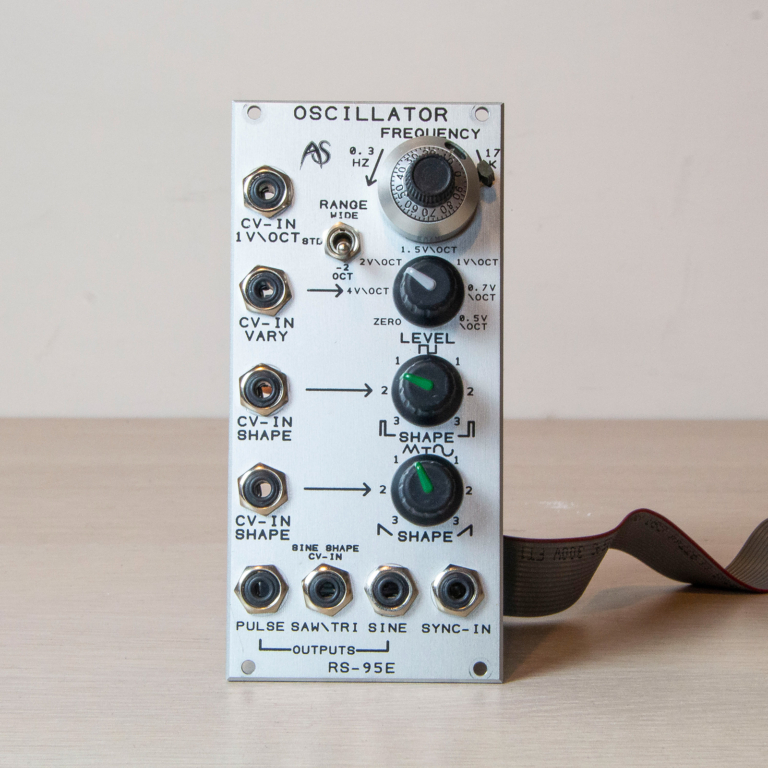 It is based on the RS-90 but has more features, predominantly a very special sine wave.

The RS-95e presented here is technically identical but instead a normal frequency control it features a gorgeous, lockable potentiometer with ten turns. This allows precise fine tune control and adds the look of an EMS synthesiser to the VCO.

The module has three audio outputs: pulse, triangle and sine.

The upper shape control affects the pulse width. The lower shape control not only morphs from a falling sawtooth over triangle to a rising saw (or ramp) but simultaneously alters the sine wave and produces a kind of smoothed, softer sawtooth. Additionally the saw/sine output is a CV-INPUT for the symmetry of the sine. Very extraordinary feature that all are voltage controllable.

The oscillator sync is “soft” and not only reacts to square waves but works with all waveforms.

The “vary” control not only attenuates but also can amplify the pitch CV. It controls linearly from 0V over 1V/oct to 0.4 V/oct.

The RS-95e generates a particularly wide range of frequencies. The minimum – approximately 0.3Hz – is well into the subsonic range, so they will double as LFOs when required. This architecture emulates that of the Minimoog and larger Moog synthesisers such as the IIIC and System 55. At the upper end of the scale, they will produce frequencies of approximately 17kHz, which is beyond many people’s upper limit of hearing.

The RS-95e generates three families of waveforms. The first is the rectangular family, whose waves are generally known as pulse waves and square waves. The second is the sawtooth family that includes falling saws, triangle waves, and rising saws (‘ramp’waves). The third is the sine wave and an associated family of skewed waves with unusual harmonic structures.

You can set the nature of the waveforms manually or control them dynamically using the CV-IN inputs provided for each family.

You can adjust the pulse wave output from 0% (leading pulse) through square wave to 100% (trailing pulse) as you turn the PULSE SHAPE control from its fully anticlockwise position through to its most clockwise position. A square wave will be obtained when the knob is at 12 o’clock. You can also influence the pulse wave shape by applying a CV to the CV-IN SHAPE socket next to the PULSE SHAPE control, as follows:

The output from the SQR OUTPUT socket is approximately ±5V.

You can adjust the sawtooth wave output from a falling sawtooth through a triangle wave to a rising sawtooth (ramp) as you turn the SAWTOOTH SHAPE control from its fully anticlockwise position through to its fully clockwise position. The triangle shape will be obtained when the knob is at 12 o’clock. You can influence the sawtooth wave shape by applying a CV to the CV-IN SHAPE socket next to the SAWTOOTH SHAPE control, as follows:

The sine wave is a sadly underused waveform found on few analogue synthesizers. There is a good reason for this: it is not simple to generate a pure sine wave. Most oscillators with sine wave outputs generate the waveform by re-shaping another wave; usually the triangle or, if this is unavailable, the sawtooth. Analogue Systems has taken this idea a step further to build a uniquely shapeable sine wave output. There are two ways to shape the sine wave:

You can use the shared SAW/TRI/SINE SHAPE knob to generate any of the waveforms shown below, or to select a waveform that lies anywhere between these extremes. These unusual waveforms have uncommon harmonic structures, and you can use them to create timbres that you will not be able to obtain from conventional synthesisers.

Using the SINE-SHAPE CV IN

You can use SAW/TRI OUTPUT as a SINE SHAPE CV IN. This facility is unique to the RS-95e. The greater the applied CV (either positive or negative) the greater the amount of waveshaping there will be. As with the SHAPE control itself, you can use this facility to create timbres that you will not be able to obtain from conventional synthesisers.

The primary method of controlling the pitch is by applying a suitable CV to the CV IN socket. This respond to the 1V/Oct standard adopted by Moog, ARP, Roland and Sequential Circuits (among others). It will not allow you to play conventional melodies if you apply a CV conforming to the Hz/Volt standard used by Yamaha and on most Korg monosynths.

WIDE: Turning the FREQUENCY control from its minimum to its maximum will cause the RS-95N to produce its full range of frequencies from 0.3Hz to 17kHz.

STD: This allows you to tune the oscillator across a full two octaves, making it possible to generate any given pitch between the -2 OCT and STD settings without applying a pitch CV. Slight detuning of one of a pair of oscillators produces a much thicker sound than would be obtained if both were in tune with each other. Radical tunings – such as fundamental with added third and fifth – offer a range of conventional ‘synth’ sounds.

2 OCT: This reduces the pitch of the RS-95 or RS-95e two octaves with respect to STD, but in all other respects the oscillator’s operation is identical with the STD mode.

The CV-IN VARY socket and its associated LEVEL control allow you to specify the oscillator’s sensitivity to pitch CV within the range ∞ V/Oct (marked “ZERO”) to approximately 0.5V/Oct. The former of these makes the oscillator invariant to incoming CVs, while the latter makes it oversensitive compared to CV-IN 1V/OCT. This is particularly useful when using an RS95 as a sync oscillator because it then becomes harmonically unrelated to the audio oscillator, thus generating a different timbre on each note that you play.

The RS-95e offers an additional output compared with the RS-90. This allows you to obtain the sine family waveforms simultaneously with the pulse and saw/triangle waveforms.

Like the RS-90, the RS-95e offers oscillator sync. This allows you to re-initialise the waveform by applying a second waveform at the SYNC IN input. The waveform is re-initialised every time the voltage of the synchronising oscillator passes 0V in a positive-going direction, increasing the harmonic complexity of the waveform, and thus the range of tones that you can obtain. The most popular use for sync is to generate “tearing” or “rasping” lead and bass sounds. However, the sync on the RS-95 is softer than that of the RS-90, which makes it possible to generate a wider range of effects than before.