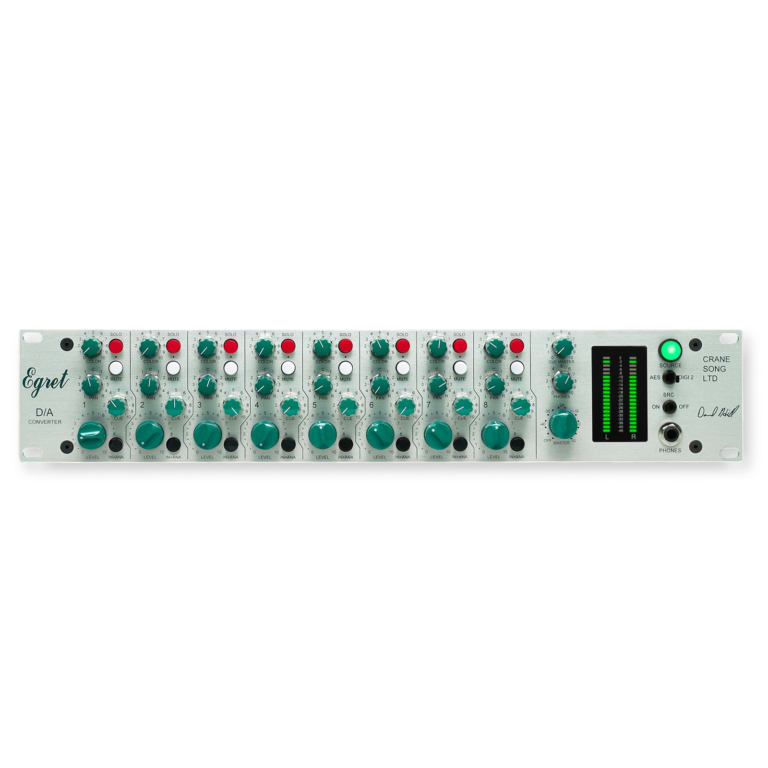 Each channel of the stereo mixer has a level control, an aux send (which is post level control), a color control, and a pan control. Each channel also contains an analog / digital source button, and solo – mute buttons. The color function is adjustable from a transparent sound to a complex mix of second and third harmonic content, creating the possibility of having clean modern sounds mixed with vintage sounds.

By using the balanced direct outputs and the balanced analog inputs you can insert analog processing into individual channels. The built in Aux bus with its master level control can be used as an effects send. A balanced stereo effects return is built into the system.

The master stereo bus level control, which is a stepped attenuator, has 1 db steps for most of its range. This allows for accurate gain control, repeatability, and stereo gain matching to better than .05 db.

The headphone system allows a monitor mix to be created when Egret is being used in multi channel location recording. Thus allowing the monitoring of all channels.

The D/A converters support sample rates up to 192K and have sample rate converters on each channel for jitter reduction. There is a front panel switch to disable the SRC for cases where lower latency is required. The system is built so that the converters and the interface can be upgraded as the technology changes.

The standard interface supports AES single wire to 192KHz, ADAT, and S/MUX to 96K. The converters can also be independently operated, even at different sample rates.

Egret is built so that the stereo and cue buses can be chained together to create a multiple input system. With a special cable Egret’s stereo bus can also be tied to a Crane Song SPIDER as a way to sum additional analog inputs while working in a mix mode.