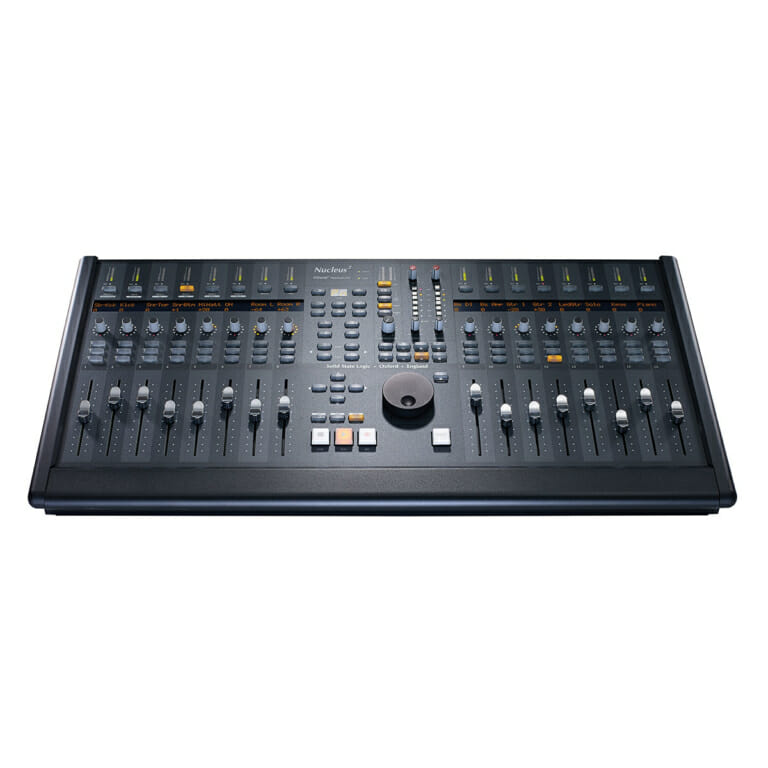 The centre of your professional audio environment

Since its release in 2010, Nucleus has won TEC’s, Sound on Sound and MIPA awards, and we now reveal the next step – a Nucleus for the world of Audio over IP.

Nucleus 2 is a unique proposition for the professional project studio with a perfect blend of advanced DAW control, transparent SuperAnalogueTM monitoring with talkback, SSL console grade mic pres, pro quality Dante audio interface and bundled SSL Duende Native plug-ins. There is no other product available which offers the professional producer all of these elements, with benchmark audio performance and elegant ergonomics. Not only is it unique but Nucleus2 is also outstanding value; these elements bought separately would cost more and deliver a less elegant solution.

Nucleus 2 is a compact, portable desktop unit that creates a comfortable, efficient, hands on operating environment for DAW based Music and Film/TV Post production. It provides everything you need to record and monitor audio and to control your DAW quickly and efficiently without resorting to your mouse. Nucleus2 streamlines your workflow and helps you focus on your sound, not your screen.

Nucleus 2 offers a unique combination of audio capabilities. At its foundation is a SSL SuperAnalogueTM signal path providing benchmark audio quality monitor output to “main” and “alternate’ speaker sets via +4dBu connections. A high quality 2+2 Ch Dante audio interface provides a record and playback path for your DAW or connectivity to a wider Dante IP audio network. Two Combi XLR mic/line/instrument level inputs can feed the audio interface and the monitor outputs simultaneously. Digital I/O via S/PDIF feeds the AD/DA of the audio interface (pre insert) enabling both a “digital to DAW” record path and a “mic/line/instrument to digital” output path. The Digital input can use Ch 3&4 of the audio interface so can be recorded to separate channels in your DAW in parallel to the incoming analogue mic/line/instrument inputs. A wet/dry control enables balancing of analogue (and digital) input and DAW playback for zero latency record monitoring. With Nucleus2 we have added a talkback input that feeds the headphones, and triggers a switchable -20dB DIM in the monitor outputs. This input has an adjustable gain, and can be switched to feed input 2 of the Dante soundcard for remote communications over the network. The Nucleus2 mic pre’s are SSL SuperAnalogue Mic Pre’s, identical to those used on SSL Duality and AWS consoles and our X-Rack system giving Nucleus2 a professional standard transparent mic record path. The mic inputs have 80Hz High Pass Filters, Polarity Reverse and Phantom Power. A pair of insert send/return connections for incorporation of external analogue processing or effects default to the mic/line/instrument inputs but can be moved across to DAW playback for mixdown. An additional “external” stereo analogue input provides a transparent SuperAnalogue monitor path for another audio interface, or any other analogue device. There is an accurate analogue output level meter. A stereo minijack connection makes monitoring from an iPod or any other portable audio device straightforward. Two headphone outputs complete the monitoring options.

Nucleus 2 connects to your computer via high speed Ethernet for DAW control and Dante Audio. It also features a USB connection and appears to your host computer as a standard keyboard enabling key command emulation. There are three USB ports on the back which operate as a USB hub. A standard jack footswitch connection is also included and there is also an SD card slot for Profile storage. Configuration and mapping of Key commands and DAW Commands is via a remote “SSL Logicitivity” browser, which allows differing control profile sets to be stored and recalled.