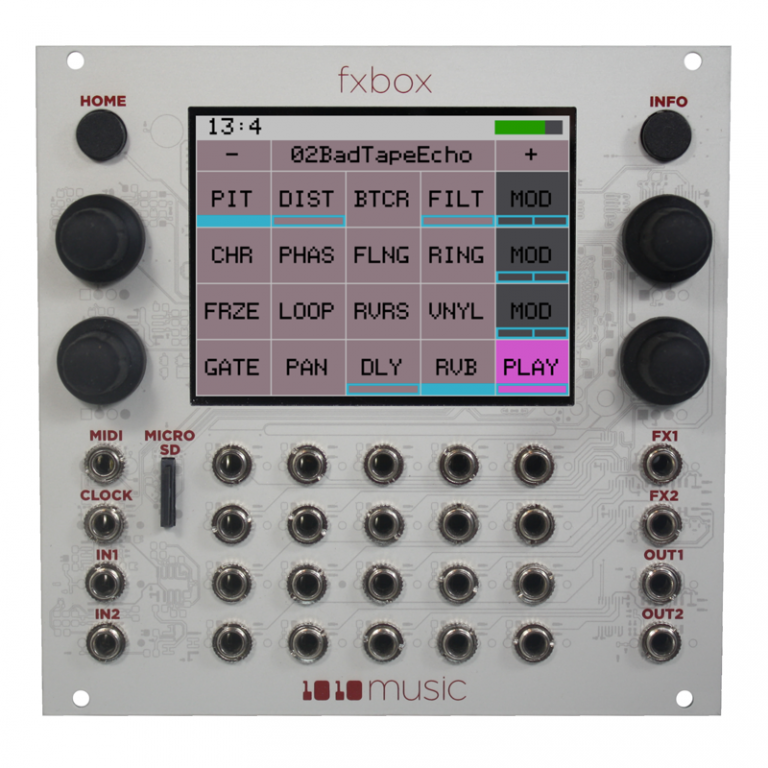 € 619,00 For European customers, please select your country to view the correct price including vat

Hands-on multi-effects processor – 1010 Music’s FXBox is tailored to the particular needs of live performers. The stereo module features 16 effect algorithms, which can be (de)activated via a touch display, gate inputs or the integrated sequencer. Users are able to combine multiple processing stages. Parameters can be adjusted via rotary encoders or touch gestures on the display. – It is even possible to edit several values at once. Three CV inputs plus a routing matrix allow users to modulate effect parameters. For synchronization, there are MIDI, clock and play inputs. The FXBox’s sound is crystal clear and very modern. – A great tool for spicing up boring drum loops, melodies or atmospheres.

The FXBox comes equipped with two audio inputs and outputs. For visualizing and editing parameters, there is a big, easily readable touch display plus four rotary encoders and two buttons. The module features 16 effect algorithms, in detail:

The effects are combinable at will. Each algorithm features up to four parameters, which can be adjusted via the module’s rotary encoders or the touch display. Using latter, it is even possible to edit several values at once. Additionally, the FXBox offers three CV connectors. Incoming signals can be routed to a multitude of parameters. Reverb signals are not only emitted via the main outputs, but two direct outs as well.

Algorithms can be momentarily activated via the touch display. Furthermore, it is possible to switch effects on and off via gate inputs or the integrated sequencer. Of course, users can also activate algorithms constantly.

The sequencer offers 16 tracks with up to 32 steps. Quantization and step length are editable. Synchronization can be done by either analog clock and start/stop connectors or a MIDI port.

The FXBox comes with 50 presets. Users can save their own creations on a micro-SD card.

A micro-SD card is included.