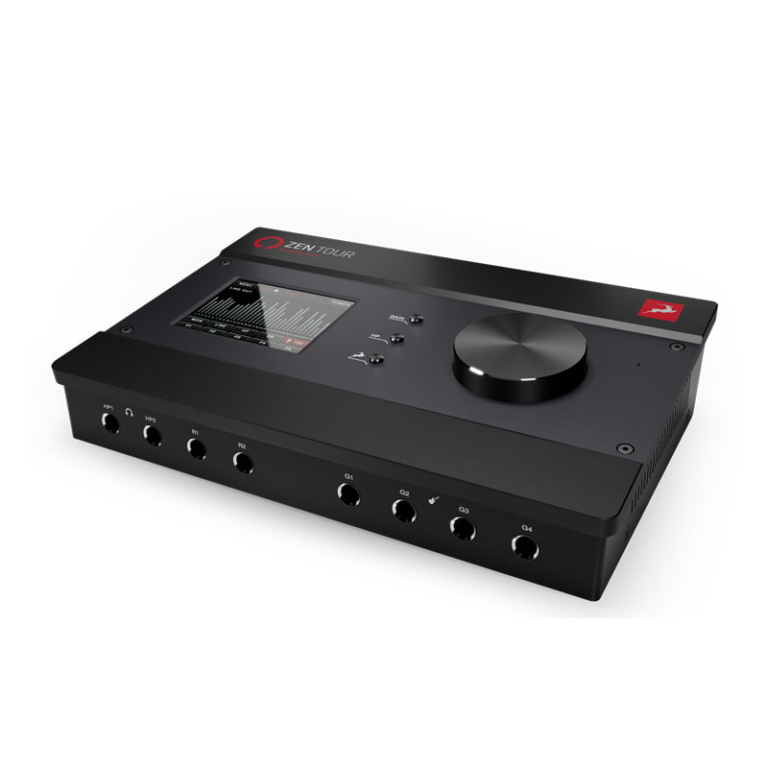 Our professional desktop audio interface grows even more powerful. Without getting much bigger. Zen Tour Synergy Core brings the following upgrades from the original Zen Tour:

Giving your projects a flying start, Zen Tour Synergy Core includes a compelling library of 36 meticulously modeled real-time studio effects. It’s all happening inside your audio interface with the lowest possible latency – thanks to FPGA’s massive parallel computing capabilities, DSP processing, and fast Thunderbolt™ connectivity. The included library can be expanded to include any effects you choose from our web store.

Built from the ground-up for the Synergy Core platform, Auto-Tune Synergy adds live pitch correction to the Antelope Audio experience.

A proprietary design that honors the best of audio engineering practices, our fully discrete, ultra-linear microphone preamps have sound quality comparable to that of a great mixing desk. Musical and transparent, they perfectly complement the Antelope Audio Edge & Verge modeling microphones’ sonic characteristics to deliver the power of our Accusonic 3D mic modeling technology right on your desktop.

The pioneer of atomic clocking in pro audio, Antelope Audio incorporates 20+ years of expertise in its audio interfaces. Our proprietary 64-bit Acoustically Focused Clocking technology & Jitter Management algorithm helps deliver the kind of artifact-free audio once accessible only to the most prestigious studios.

Record and monitor with maxed-out effects chains at high sample rates and low buffer sizes without taxing your CPU! You can enjoy Latency-Free Direct Monitoring over 4 independent internal mixers with 32 assignable inputs and stereo outputs.

Zen Tour Synergy Core is our desktop-sized answer to professional rackmount equipment. With it, all you need to make great recordings in your project studio, rehearsal space, or on the road is power, a decent laptop, and reliable headphones. The Synergy Core architecture lets you run processing-heavy projects without carrying external equipment like DSP accelerators, FX processors, and authorization dongles.

Built inside the software Control Panel, a comprehensive Routing Matrix houses a full-fledged digital patch bay to freely route audio between the interface’s analog and digital inputs and outputs. Run DAW playback through Synergy Core FX, re-amp guitar DIs through the Shred Guitar Amps & Cabs, and integrate external equipment. With all ‘training wheels’ removed, your workflow can be as esoteric as you want it to be.

This time, it’s not the manufacturer who’s making decisions – you are. Whether your weapon of choice is PC or Mac, Zen Tour Synergy Core carries both Thunderbolt 3 (Type-C) and USB 2.0 (Type-B) ports for cross-platform compatibility with Mac and Windows machines.

Hand-assembled in Europe from high quality materials (steel and anodized aluminum), Zen Tour Synergy Core withstands the demands of your studio desktop, road rig and practice space. Furthermore, our rock-solid drivers and 20-hour customer support (phone, chat, ticket system) will ensure you get consistent, smooth performance out of the interface in all conditions.

se the Antelope Audio AFX2DAW plug-in to bring our hardware-processed, latency-free Synergy Core FX within your DAW of choice. Enjoy convenient workflow and DAW effects automation with all FX and audio I/O processing handled by the audio interface.

*Available as a separate purchase for Mac Thunderbolt.

With updated converters and Antelope’s signature 4th-generation clocking, Zen Tour Synergy Core offers pristine AD/DA conversion for artifact-free recording and critical listening with a best-in-class dynamic range of up to 130dB (measured at the monitor outputs). The sound quality rivals that of professional rackmount studio interfaces, which occupy additional space and may cost times as much.

The Zen Tour Synergy Core’s purpose-built preamps and Accusonic 3D modeling engine lets you transform the Antelope Audio Edge and Verge modeling microphones into expensive-sounding vintage replicas. Shape the final sound with complete control over proximity effect and change polar patterns during or after recording. Choose from a collection of classic and rare microphones as you monitor and record live, bringing out the musician’s finest performance.