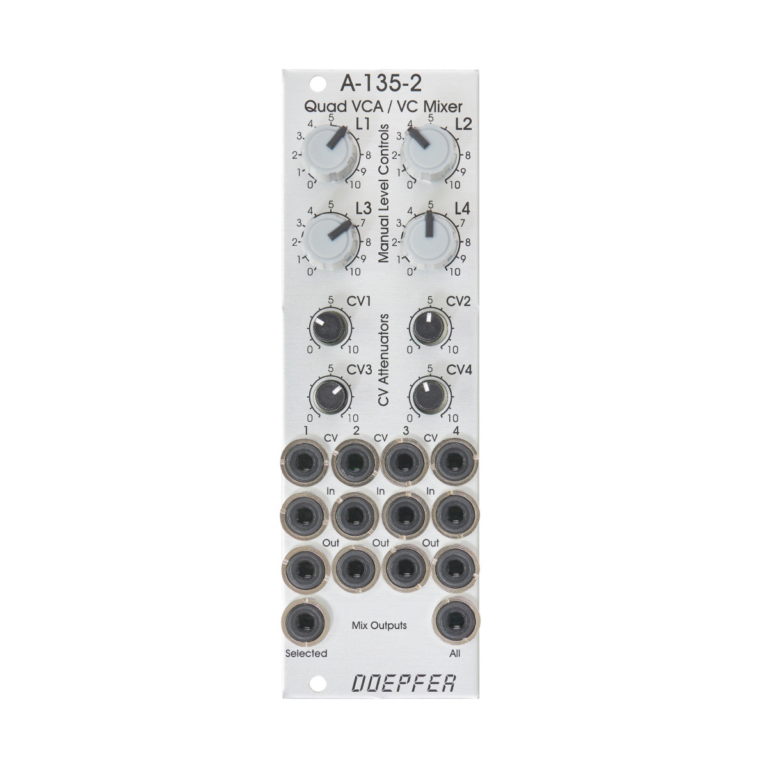 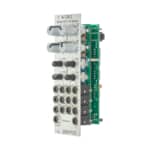 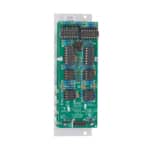 The popular Doepfer A-135 has been reduced to 8HP, making it one of the most compact voltage-controlled four-channel audio mixers on the market. The new version now offers separate All and Selected outputs for even more flexibility! The volume of each channel can be modulated via control voltage. In addition, each channel has an attenuator and a gain control on both the audio and CV inputs. The module can be used as a mixer, as a dual stereo VCA, as a quadruple VCA or as a quadrophonic distributor. Thanks to DC coupling, it can also be used for processing control voltages.

Module A-135-2 consists of four linear VCAs with mixing function.

The input level is adjusted with the attenuator. The volume control of each input signal can be controlled manually with the gain potentiometer and via a control voltage at the CV input, and can be tapped at the individual output, just like with a normal VCA.

In addition, the A-135-2 mixes the four signals at one of the sum outputs with a maximum gain of 0.6 to avoid clipping.

The All output always mixes all four channels.

Thanks to internal jumpers, the four signal inputs can be normalized with each other. Thus a signal can be distributed to 4 different channels by voltage control (e.g. for quadrophonic distribution of audio signals).

Controls, In/Outputs and Functions of each VCA:

Functions of the voltage controlled mixers:

Additional technical specification for each VCA (based on the specifications of the VCA circuits CEM3360/AS3360 used in the module):