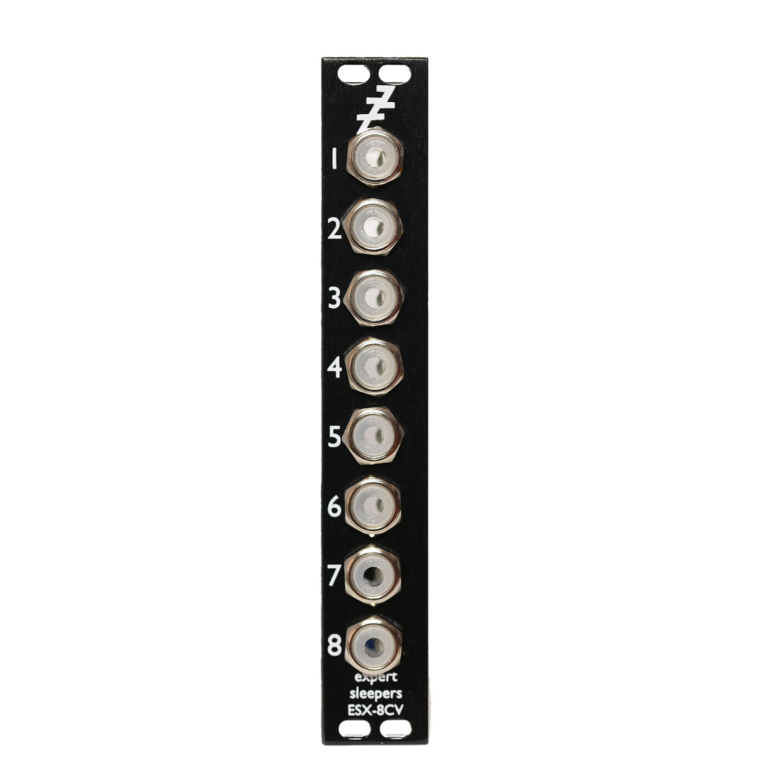 The ESX-8CV is an expansion module for the ES-4, ES-40 or ES-5, adding eight CV outputs from one expansion header.

In order to squeeze eight 12 bit channels through one 8 bit connection, the channels are time-multiplexed and so effectively run at between one-third and one-twenty fourth of the audio sample rate. For example, if the audio interface/DAW is running at 48kHz, the ESX-8CV’s outputs are running at between 16kHz and 2kHz, depending on how many channels are active. This is still plenty fast enough for most CV purposes, except for audio-rate modulation and the very fastest envelopes. Because the outputs are still derived from the audio stream, they retain the advantages of the ES-3/4 over traditional MIDI-based interfaces, that is, rock solid timing and absence of jitter.

The front panel is drilled for both Doepfer and Analogue Systems mounting holes (using a ‘slot’ rather than a single round hole). The power connector is a Doepfer standard 16 way IDC, with -12V furthest from the top of the board.

The ESX-8CV requires software in order to time-multiplex the eight output signals, and to encode them for the ES-4 or ES-5. Currently, the only such software is the ‘ESX-8CV Combiner’ plug-in, part of Expert Sleepers Silent Way, and our Max/MSP external (see below).

A Silent Way licence is not included with the ESX-8CV – however, the ESX-8CV Combiner plug-in functions in a licence-free mode, so ESX-8CV users are not forced to buy Silent Way. Such users can than evaluate the rest of the Silent Way suite in demo mode.