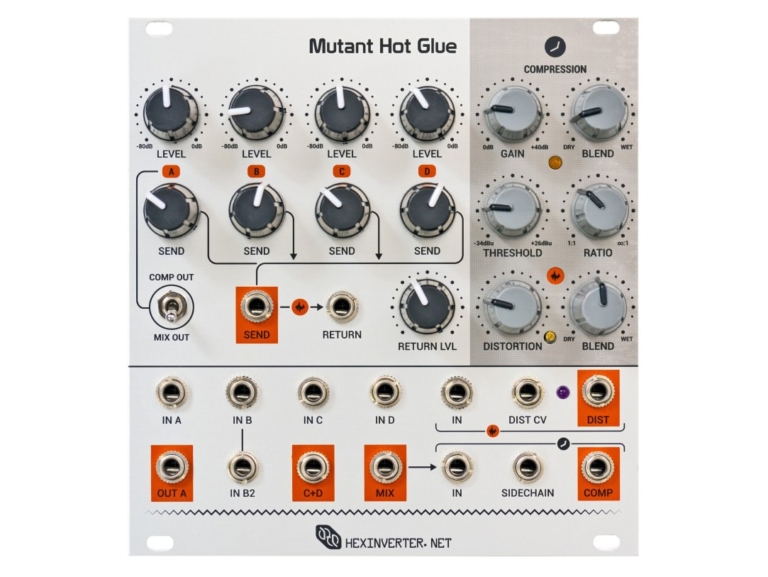 four-channel bus mixer with different outputs, FX-Send as well as a soft-knee compressor in studio quality

€ 448,96 For European customers, please select your country to view the correct price including vat

The modular hot-melt gun is a four-channel bus mixer with a number of different outputs, FX-Send as well as a soft-knee compressor in studio quality and a voltage controlled analog distortion. Both distortion and compressor ar normalized to the mixer but can be used individually.
The mixer has four input channels, each one with level and FX send controls. Channel 1 has an direct output which is handy as sidechain signal for the compressor. Channel 2 has two inputs, sharing the level and send potentiometers. You may plug in stereo modules here (e.g. Mutant Hihats) but also a mono siglan. The mix of channels C and D has a separate output. The mixer’s main output is normalized to the compressor.
The analog compressor has a soft-knee curve and is built with ICs which are used in studio gear. The gain control provides you with up to +20dB compressor gain. It’s possible to bland betwenn the original signal and the compressed signal which allows for parallel comprossion. A side chain input is available and a LED display the compression rate.
Besides Gain there are the parameters threshold and ratio.
The Distortion is a classic analog one and you can set the rate of distortion manually and with a CV. The blend parameter crossfades betweeen the dry and the distorted signal. The distorion is normalized to the FX send and FX return sockets, which means by turning up the send control you can implement the distorion directly in the mixer. Patch other effects into the FX loop instead of the distortion.

Inputs A, B, B2, C, D
Outputs: A, C+D, MIX
Distortion: In, Out, distortion CV In
Compressor: In sidechain in, compressor out
FX: send and return