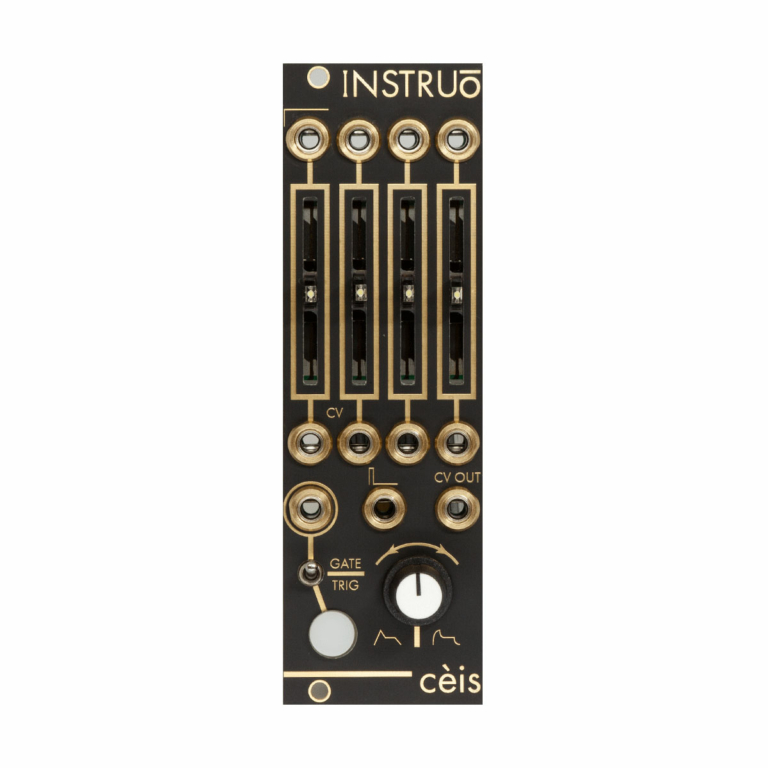 The Instruō cèis is a fully analogue voltage controlled ADSR envelope generator. The ADSR function generator is the model pioneered by the East-coast mindset and is extensively used in subtractive synthesis patches. The cèis gives the ability to externally control the attack, decay, sustain, and release stages of the envelope while also emitting trigger and gate signals for each segment, offering maximum versatility from a classic tool.

Each envelope segment is controllable via smooth action 30mm travel faders. These faders sum with their own external CV inputs for dynamic variation of the envelope segment durations and level.

Each fader is illuminated when particular segments of the envelope are active. These lighting signals also drive 4 gate outputs that are high when the corresponding envelope segments are active.

When controlling the cèis with trigger signals, as opposed to longer gates, the Gate/Trig switch can be used to force the attack segment to complete its charge. This allows for use as a variable AR envelope.

In addition to the Gate/Trigger input jack, the cèis can be controlled manually by its illuminated button. This button lights to indicate the output voltage level.

The shape potentiometer varies the curvature of the temporal segments. Fully CCW and the envelope ramps are perfectly linear. CW will curve the A, D and R ramps to classic exponential shapes.