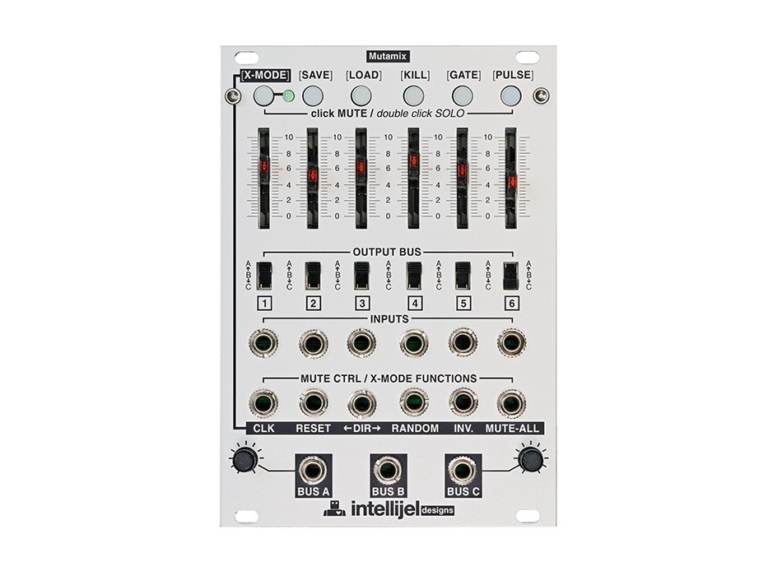 The Mutamix module is the successor to the now discontinued six-channel mixer Mutagen but now it has voltage controllable Mute functions with memory! You can abuse the Mutamix as an unusual sequencer when used with CVs at the signal inputs.
Six channel mixer for audio and CV signals. Each of the channels can be routed to one of the three output busses A, B or C with a switch.

The six white buttons have different functions, depending on the mode:

In ?NORMAL? mode all the buttons at the top act as mute on/off switches with a single click. The LEDs in the slider illuminate to indicate a muted channel. If you double click you will SOLO the channel and that channels led will flash on/off. Mutamix remains in SOLO state until all channels are unsoloed.

You can save the state of the muted channels into 6 possible locations (and recall them) by pressing the [SAVE] or [LOAD] buttons for about 1 second.

If [KILL] is activated all inputs and outputs are muted and all the leds flash at a rapid rate. Pressing any button will immediately exit KILL mode and return to the previous state.

[GATE] and [PULSE] allow to select whether a corresponding channel MUTE CTRL jack toggles mute on/off (PULSE mode) or the channel is gated on/off (GATE mode) when the controlling signal is HIGH.

[XMODE] is a special mode. In XMODE single clicks of the buttons no longer toggle muting. Instead they instantly recall a mute state preset (the 6 possible memory locations that you would have stored using the SAVE function).
In addition to this, all of the MUTE CTRL jacks now become XMODE controls:

CLK: cycle through all the presets in a given direction (default forward) on every pulse
RESET: Start back at preset 1
DIR: toggle the direction that the presets cycle through
RANDOM: every pulse selects a preset at random.
INV: the current mute state is inverted (i.e if channels 1, 3 and 5 are muted then after a pulse, 2,4, and 6 are muted and the rest are unmuted)
MUTE-ALL: no matter what the current state, all channels are muted.