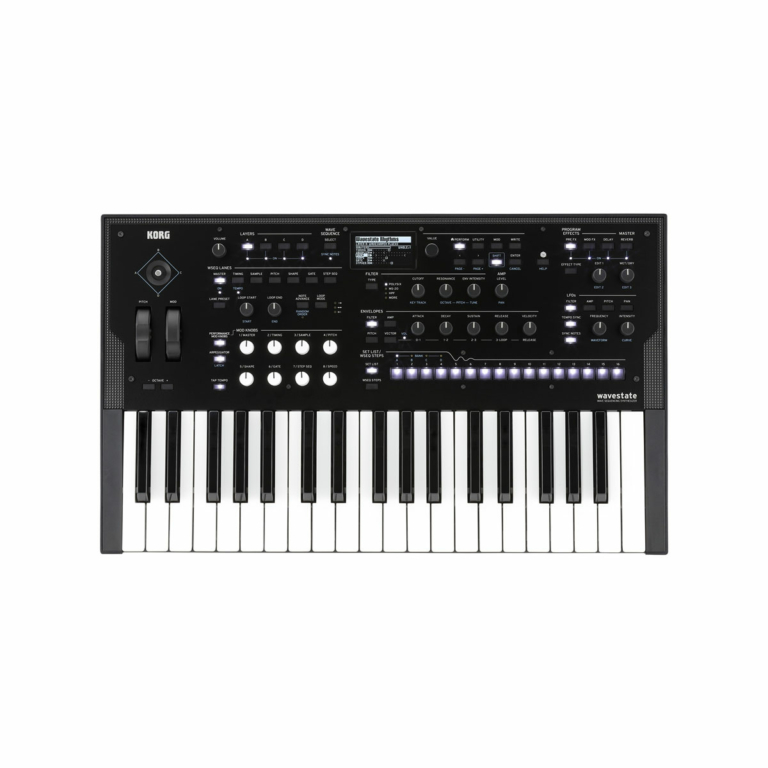 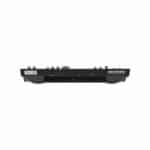 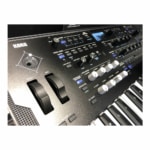 Digital synthesizer with 37-key full-size keyboard, which reinterprets the combination of Wave Sequencing and vector synthesis of the legendary Wavestation in a modern key. Quality, evolutionary and extremely expressive sounds for your live and your productions.

Legendary synthesis, greatly evolved. Organic. A powerful source of inspiration for your music.

Korg is proud to add yet another milestone to its impressive portfolio of digital synthesizers: the Wavestate. Based on the new and greatly evolved Wave Sequencing 2.0, the Wavestate puts unique and ever-changing sounds at your fingertips. The Korg Wavestate goes far beyond the classic nostalgic reissue of the Wavestation: it has been redesigned from the ground up, taking inspiration from sound sources such as modular synths, groove boxes and algorithmic generators. All this was necessary to satisfy and stimulate the tonal needs of the new generations of musicians, producers and composers. The compact form factor, with a full-size 37-key keyboard, lends itself to use in any situation in the studio, live and on-the-road. KORG’s legendary Wavestation introduced Wave Sequencing synthesis to the musical world, a technology that allowed raw audio samples to be transformed into sounds never heard before. Tools such as OASYS and KRONOS then enhanced Wave Sequencing, further expanding it with the introduction of evolutionary pads and rhythms.

In Wavestation, the individual steps of a Wave Sequence consisted of sample, duration and pitch. This made it possible to originate interesting patterns, which, however, were repeated constantly, continuously, in the same way. Here we asked ourselves: What would happen if these patterns developed organically, unexpectedly, rather than repeating themselves slavishly?

The new Wave Sequencing 2.0 technology separates time, sample sequence and melody, so that each of these elements can be manipulated independently. Other new features are shape, gate duration and step sequencer values. Each of these elements develops temporally through the respective “Lane”, which is represented on the display as an editing track with parameters such as the number of steps and the starting, ending and loop points. Each time a sequence is played, the various “lanes” combine to generate the output sound. For example, a sample can be associated with different duration, pitch, shape, gate, and step values ​​each time it is played. The start, end and loop points of each Lane can be modulated by sources such as velocities, LFOs, envelopes, Mod knobs, or other controls. Each note in a chord can be played differently! On the lanes it is also possible to randomize the order of the steps at each playback, with the possibility of intervening in real time on the range of the steps included. And finally… Each of the steps can be omitted randomly, by intervening on the “probability” parameter which operates with values ​​in the range from 0 to 100%. The result is an organic and evolutionary sound that responds to your controls. The four arpeggiators available in the instrument can interact with the Wave Sequence to further expand the sound horizon of this digital synthesizer.

With its numerous physical controls, the wavestate invites you to sonic exploration. All filters, envelopes, LFOs and effects are at your fingertips and editable from the well-placed controls on the dashboard. 8 “Mod” potentiometers are pre-assigned to get the best out of the reproduced sound, but you can configure them as you wish, to control the parameters that are useful to you. Use the knobs in live performances and save the result as a new sound. The wheels for controlling the Pitch Bend and Modulation could not be missing, to which the Vector Joystick is added, to guarantee you a multidimensional expression in every moment of your performance.

Do you want to go even deeper? Virtually all physical controls, as well as most of the parameters that can be displayed on the screen, are modular. You can even modulate the settings of each Step of the Wave Sequence. Mod Processors allow you to vary modulation sources by adjusting quantization, intensity, curve, and other parameters.

Do you want to get out of the usual routine and venture into sounds that are a source of creativity for you? A dedicated button, identifiable on the dashboard thanks to the icon depicting a nut, allows you to start intelligent randomization processes that will give life to new sounds, randomly varying the entire sound or some of its parameters such as the filter, the Sample Lane or the effects. You can use the sound obtained as it is, or use it as a starting point for creating your own custom sound.

Made up of several Gigabytes of samples, the KORG wavestate sample library is thousands of times larger than that of the original Wavestation. A rich source of quality material for Wave Sequences, which includes banks of samples produced by Plugin Guru, a new collection of samples specially packaged by Korg itself and samples extracted from the Kronos and Krome libraries. As per Korg tradition, in the summer we find all the samples of the original Wavestation, including the optional ones, and an immense collection of Wave Sequence. All of this forms the foundation for your 64-voice stereo polyphony sound experience based on KORG’s proprietary aliasing-free sample playback technology.

Add a vintage character to your sound by processing it with the MS-20’s aggressive Lowpass and Highpass filter emulations, or apply the powerful, but softer lowpass derived from the Polysix. Sculpt and refine with a collection of lowpass, highpass, bandpass and resonant notch filters at 2 and 4 poles. Alternatively, you can experiment with the particular KORG Multi Filter, which offers a simultaneous and modular interaction between different filter modes.

All this synthesis power might lead you to think that the wavestate can only generate one sound at a time. This is not the case. To get richer and more complex sounds, you can layer up to 4 different Programs within a Performance, each with its own effects and arpeggiator. The vector envelope and joystick mix the individual voices (Programs) of the 4 layers and can also modulate additional parameters.

An arsenal of effects

Wavestate effects allow you to achieve studio quality sound. Each Layer has three dedicated effect slots and, in addition, the Performance features a master reverb and a parametric eq. You can load the effects useful to you by selecting them from a list that includes the most traditional processors such as compressors, equalizers, phasers, stereo delays, as well as various effects with a unique and distinctive character: Wave Shaper, Talking Modulator, Reverse Delay, Multiband Mod Delay, and Overb (derived from OASYS), VOX amp simulators, VOX wah, multi-head tape echo and a collection of the most popular guitar pedals.

Set List and seamless transition from sound to sound

The Set Lists allow you to organize the Performances of your summer, to guarantee you immediate access during live performances or in the rehearsal room. Thanks to the Smooth Sound Transition, all previously played voices will have a natural decay, including any effect, even if you select a new sound.

Integrated into any setup

The balanced stereo outputs allow you to connect to any recording or listening system, a stereo headphone output allows you to play intimately, without disturbing. The MIDI DIN connectors ensure integration into traditional MIDI set-ups, while the class-compliant USB “B” port connects to Windows and Mac computers and, in addition to the transmission and reception of MIDI data, guarantees interfacing with the librarian software downloadable for free from the KORG website.

Designed in the Californian headquarters of R&D KORG

* Product specifications and aesthetics may be subject to change without prior notice.