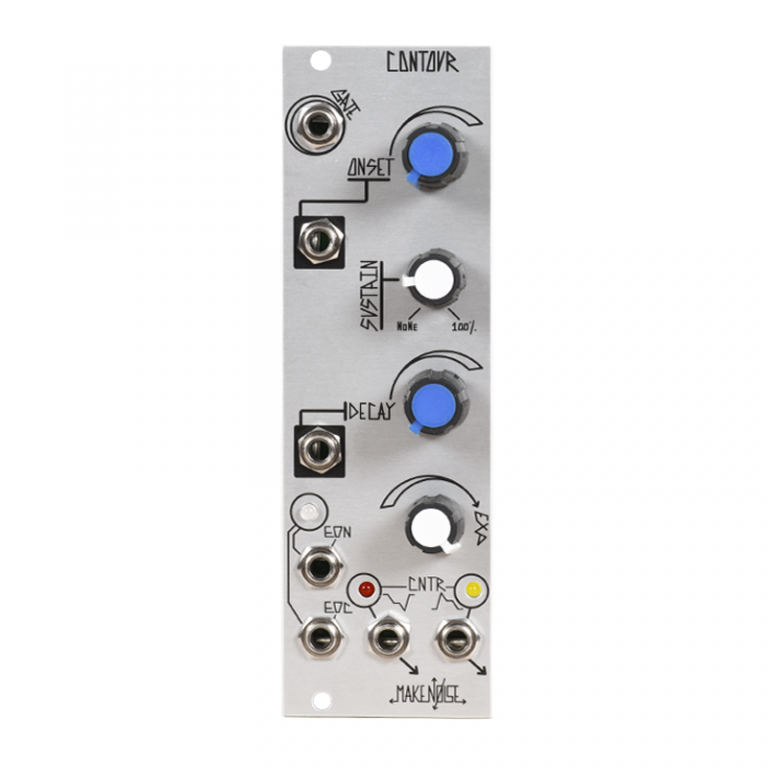 € 114,00 For European customers, please select your country to view the correct price including vat

Contour is a classic ADSR envelope with some nifty additional features. Attack and sustain parameters feature dedicated potentiometers. Decay and release are controlled mutually via one knob. CV inputs allow users to modulate all time parameters. Contour’s curve shapes can be linear or exponential. – Or anything in between. EON and EOC connectors emit a trigger signal after the attack respectively the release phase is completed. For tapping envelope signals, there are a normal and an inverted output. Contour stands out due to fast response and intuitive operation. The module is a great choice for creating percussive sounds. By connecting the EON output to the gate input, Contour can be transformed into a LFO.

At its core, Contour is a classic ADSR envelope. The module is activated via a gate input. Attack and sustain parameters can be adjusted via dedicated potentiometers. The length of decay and release phases is controlled via a shared knob. – The same concept was used for the Minimoog. Envelope signals are emitted via a normal and an inverted output. LEDs visualize the module’s work. Modern additions include CV inputs for attack and decay / sustain parameters. The circuit’s curve shapes can be crossfaded between linear and exponential characteristic. EON and EOC connectors allow musicians to daisy-chain several Contour modules to form a complex envelope. The connectors emit a trigger signal each time the attack (EON) respectively release phase (EOC) is completed.