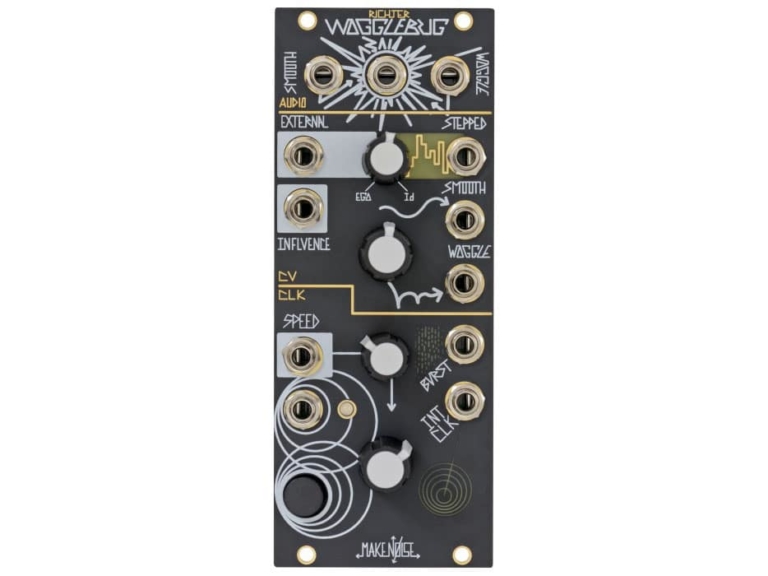 The Wogglebug: your personal monster for the modular system which can produce clocked stepped and smoothed random voltages, the ominous Woggle CV and featuring two oscillators that are controlled by random and finally the ringmodulated output of both VCOs. The module can be clocked externally but it has an clock generator and additionally a random gate burst generator, creating fast, short random pulses.

The new version in black is smaller, has a stable clock, CV of influence parameter and some other minor changes, see below.

At each clock impulse from the internal clock generator or from an external source the Wogglebug generates various signals, audio, random CVs and clocks.
– “Smooth” is a more or less fluctuating random control voltage.
– “Stepped” is it’s staircase-shaped brother, procesed by a S&H, with controllable amplitude. Alternatively you can inject an external signal.
– “Woggle” is a bouncy, percussive, sinusoid CV with a decaying amplitude.
All CVs are available at sockets. In addition Smooth CV and Woggle CV modulate frequencies of two VCOs which have individuakl output. Additionally there’s a ringmodulator which is fed from both VCOs. Alternatively you can insert one more audio signal to produce more strange noises. While the “normal” VCO outputs sound like you would imagine, the ringmodulator spits out very weird, extraterrestrial signals. 🙂

The ultra-stable clock of the internal generator is available at a socket. You can modulate the clock rate by CV and control it up to audio range. At each impulse the Wogglebug generates at the Burst output a more or less dense stream of short random clocks. It is possible to synchronize the Wogglebug to an external clock.

changes in version 2: reverse power protection, narrower faceplate with easier design and more LEDs for visualizing functions, CV input fir influence parameter. The clock is stable now and can be used as master clock. Due to the fact that the new attenuator at the clock CV input is normalized to +8V the clock frequency range has benn expanded into audio rate.
To simulate the behaviour of the old Wogglebug that produced a jittered clock, random gate bursts, sometimes sputtering and spazzing off for brief moments of brilliant freedom, only to fall back into the hands of the clock… just patch the stepped CV output to the clock CV input and turn the attenautor up to 10%.
The HOLD button freezes all random voltages without making the clock stop.