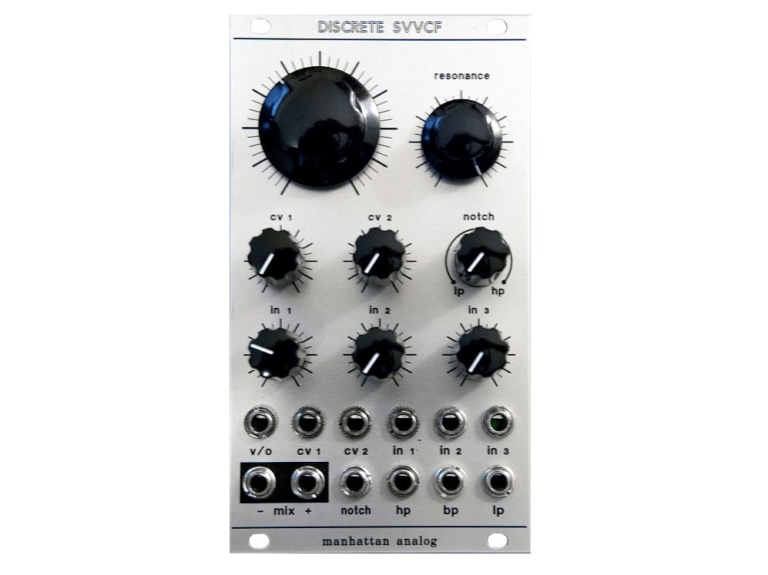 € 258,00 For European customers, please select your country to view the correct price including vat

Long-awaited and stunnigly beautiful State Variable Multimode filter built around transistors, combining the likewisely transistor-based mixer of Moog’s CP3.
Soundwise somewhere in between the creaminess and wetness of a FrequenSteiner and the pleasant sound of transistors and for that reason one of THE filter modules of 2014!

Cutoff frequency control on the SVVCF is handled with a big knob, a 1V/octave input and two CV inputs with attenautors. The resonance can be controlled manually only, though.
Each filter type i.e. low pass, band pass, high pass and notch has an individual output socket. Similar to Oberheim’s SEM filter the notch characteristic can be blended from low pass over notch to high pass, allowing for fine adjustment of the timbre.

The input section sports no less than three audio inputs which are mixed internally. This mixer is inspired by Moog’s CP3 module and also built with transistors, which have a distinct sound. Manhattan Analog’s idea to bring the mixer outputs (a positive and an inverted one) to the front planel is just brilliant! Not only you can use the mixer as a individual function block but it is possible to patch the outputs beck to the inputs and create feedbacks. Imagine this in combination with the transistor distortion … this can get pretty gnarly 🙂

The SVVCF is an adaptation of a design by Scott Stites.