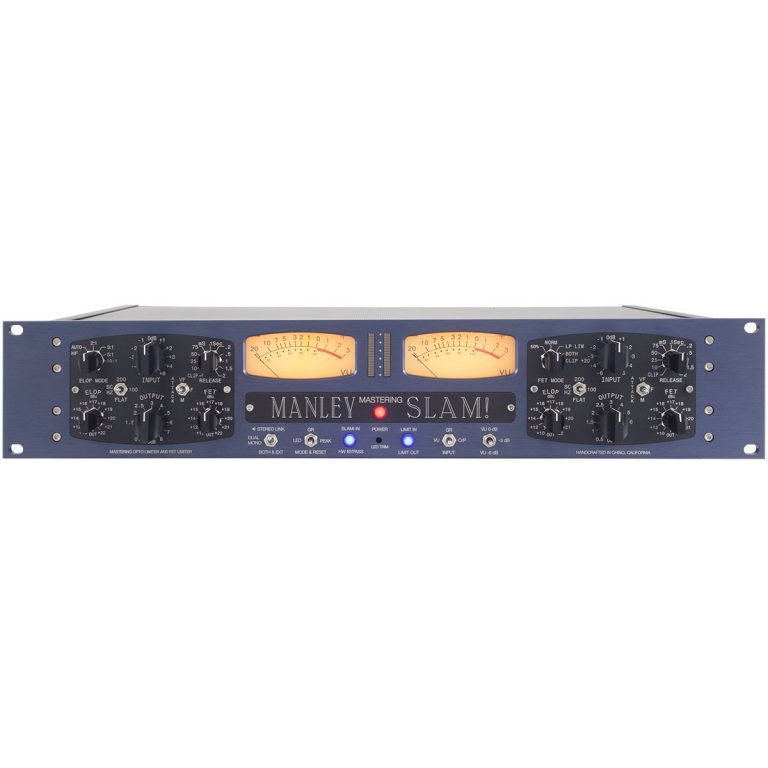 € 10.497,00 For European customers, please select your country to view the correct price including vat

The Mastering Version of the SLAM! features the stereo ELOP and FET limiters in tandem dedicated for mastering controlled by precision switches instead of pots. All functions have been expanded and specially tailored for mastering.

Proudly from our beginning, we at MANLEY LABS have been closely involved with numerous mastering facilities around the world. For these most demanding engineers in our industry, we have created specialised products such as our all-tube tape repro head amps, digital converters, high-powered vacuum tube monitor amplifiers, through to custom monitoring consoles, all the way up to complete facility design and installation.

You can read on the regular SLAM! page all the particulars about the limiters and the general gist of the SLAM! Keep reading on below for specific info about the Mastering Version of the SLAM!

First off: no microphone preamps. You mastering engineers certainly don’t need those. The mic pre and input select switch are removed and the switches become dedicated “mode” switches one each for the ELOP and the FET limiters.

3) The LEFT blue erstwhile-“limit” button becomes a master stereo LIMIT bypass switch here in the Mastering Version. When it is not engaged, it becomes a true hard-wire bypass (This was not possible on the mic preamp regular version obviously).

5) The what-was-the-Phantom toggle on the back of the unit becomes the Unbalanced 1/4″ jack input select in this new mastering version.

More than that, we really like the way it works and sounds and we generally prefer it to the non-mastering version for stereo tracks. There is a lot less fiddling involved to maintain L/R balances and the new modes are subtle but fun. It is easy to make just about anything sound better.