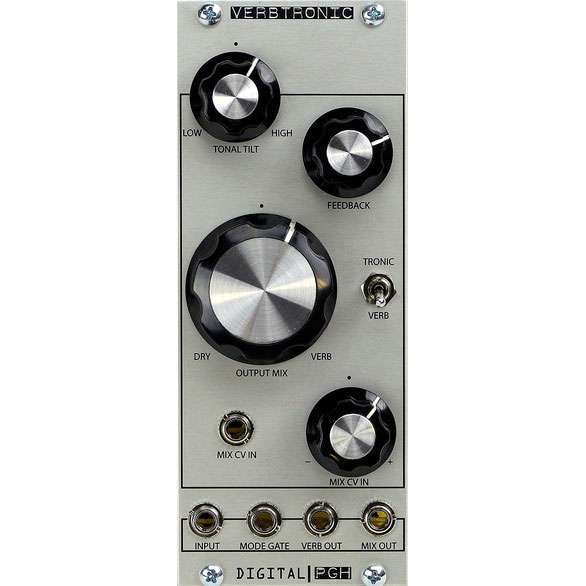 Verbtronic is a digital mono reverb module, reminiscing early digital delays because of it’s artificial sounds. Nothing here sounds like “Cathedral” presets, instead we get very dense synthetic, lush rooms with character and a certain digial slapback sound.
We think it fits experimental music and musique concrète vey well and is great for “compacting” gloomy, dark sounds, for creating drones. It should be a suitable tool generating scary atmospherical sounds for engrossed horror movies and egoshooter games with a psycho touch.

The module offers comapratively few parameters: TONAL TILT is a tilt EQ for emphasizing either high or low frequencies. FEEDBACK varies the amount of effect signal being sent back to the input. OUTPUT MIX controls the dry/wet mix and is a voltage controlled parameter.

To enhance the variety of effects, the Verbtronic has two reverb modes between which you can select with the toggle switch or a logic signal at the “mode gate” socket:
VERB creates rather short to medium reverbs with short reflexions. Lots of feedback builds up it the low mids and hums at extreme settings.
TRONIC instead is specialized in long and unnaturally dense, hovering reverb. High feedback values saturate the sound and condense it in a higher frequency band than in VERB setting.