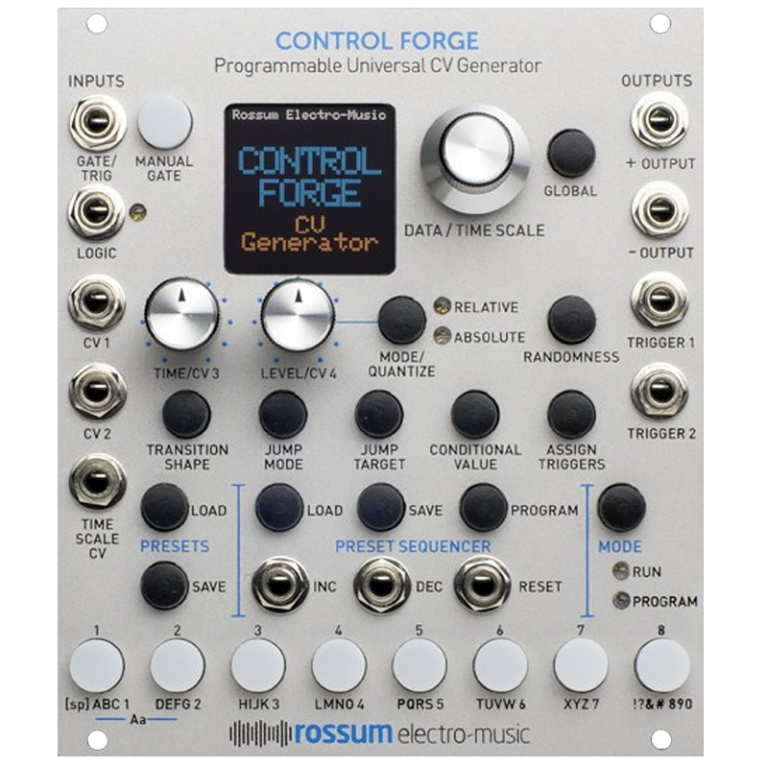 € 558,00 For European customers, please select your country to view the correct price including vat

A Programmable Universal CV Generator whose basic functionality is drawn from the E-mu Morpheus’s insanely powerful (but hard to program on a two-line display) Function Generators. But now expanded into a supremely flexible modulation source encompassing elaborate one-shot contours, evolving cyclical patterns and sequences of arbitrary length and complexity.

At its base the Control Forge is a function generator with eight segments, each offering variable time constants, target voltage levels and curves. The module saves hundreds of presets and the pattern sequencer can step through them.

The level of each segment can be defined either relative or absolutely to the prevoius stage’s ending level and optionally it can be quantized to the next 1/12V. Random with gaussian or linear distribution can alter certain levels constantly. The time scale may be set manually or via a control voltage even during runtime.

Control Forge shows 67 different curves for the transition between segments, from linear and exponential over various random and chaotic curves up to some which are hard to comprise. Some even show the characteristic of passing the CVs of certain segments directly to the output.

Chosing unipolar curves turns the the module into a sequencer which, in combination with the preset sequencer, allows for sequences with more than 100 steps length which are editable in realtime.

Very unique is the possibility of conditional jumps from certain selected stages to other segements if a particular condition is met, e.g CVs being higher or lower than the selected conditional value, the presence or lack of a gate or logic high at their respective inputs, rising or falling edges at the inputs, etc. So, in addition to one-shot shapes, extremely elaborate cyclical patterns can be programmed that evolve based on the various conditional inputs.
Besides, two triggers are programmable which respond to various states.

All presets and sequences can be transferred to any number of Control Forge Sattelites which can act as fully stand-alone modulation sources, absolutely independent of the module.