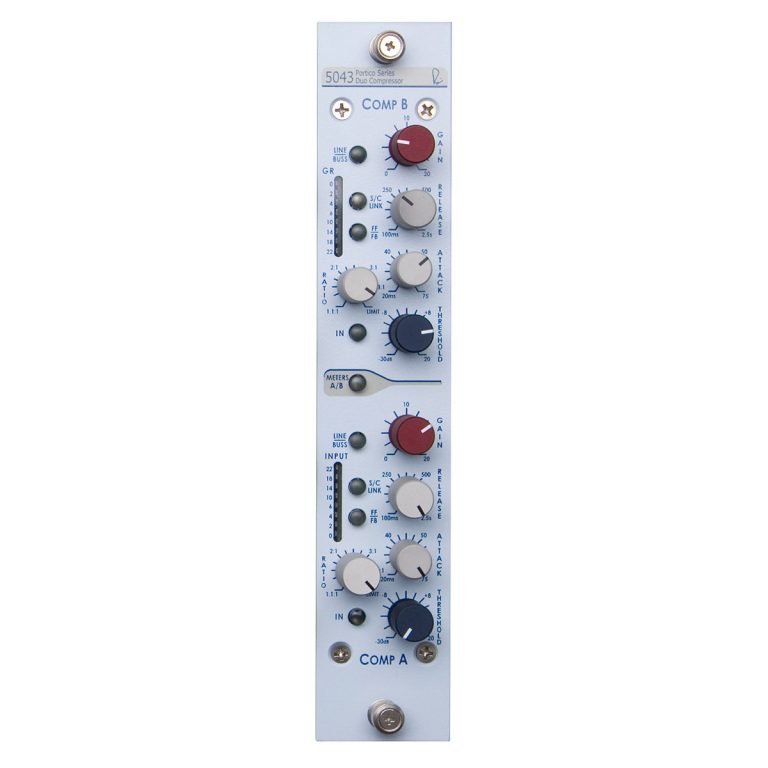 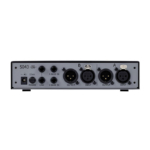 The 5043 Duo Compressor/Limiter is a powerful approach to dynamics processing for the Portico Series, designed with both tracking and mixing applications in mind.

The Portico 5043 embodies two independent Compressor-Limiters (Channels A and B) housed within a half rack, 1U module. They can be used independently (on two distinct tracks), linked as a stereo pair, or connected in sequence to provide two separate control slopes. When used as a stereo pair, linking the DC control circuits via the front panel A/B button enables the level of each channel to be held in a constant relationship. Rear panel TRS connections are provided to link multiple 5043s. This linking may also be extended to some of Rupert’s former AMEK CIB and DMCL units.

When used in sequence, the Portico 5043 can be configured easily to provide dual slope compression and limiting as suggested in the graphs below.

Any number of Portico modules that are equipped with the “TO BUSS” button may be sent to the BUSS input of the 5043 which makes it the ideal choice to form the core of a simple and cost-effective Portico mixing system. The Line input, when selected, provides a dedicated, transformer-balanced 10K impedance bridging input so that the 5043 may be inserted or included in any appropriate part of the signal chain at Console line-up level.

To control gain, a V.C.A. or Voltage Controlled Amplifier (or Attenuator) is used. There are many types of voltage control devices, including tubes, discrete and integrated solid state circuits and naturally non-linear devices, each one having its own characteristic behavior that reflects sonically on the final performance, providing a character or signature that can be musically attractive (or not!). The Portico 5043 makes use of a very accurate, low noise, low distortion V.C.A. having essentially no signature of its own.

A part of the audio signal is rectified and smoothed to produce a suitable control voltage for the V.C.A., which has to respond very quickly and have low distortion. If the response is too fast, some of the signal will be unnecessarily gain-controlled. If the response is too slow, the signal will overshoot and the first few cycles will not get compressed. The speed and accuracy of the response – known as the “attack” – and the timeframe that gain remains under the initial control – known as the “release” or “recovery” – each play a large part in the way a compressor sounds.

All Portico modules use input and output transformers and almost entirely discrete component amplifiers. In fact, the Line amplifiers on their own, inserted into the signal chain, are capable of enhancing the sonic quality of many signal sources, especially those of digital origin. These are some of the factors that enable the Portico 5043 to work so unobtrusively within the context of a very high quality audio chain.

Feed Forward or Feed Back?

The Portico 5043 provides a choice of feed-forward or feed-back compression modes. The FB Button allows the user to switch between the two modes.

If the V.C.A. control voltage is taken from the 5043 input (i.e. before the V.C.A.), the V.C.A. knows right away that a gain change is required and there is an almost immediate response. This is known, logically, as a “Feed-Forward” compressor.

If the V.C.A. control voltage is taken from the 5043 output, (i.e. after the V.C.A.) it cannot act immediately on the V.C.A. because it has already been modified by the compressor circuit through which it has passed. This is known as a “Feed-Back” compressor. The two compression characteristics are quite different; there is more “Overshoot” and both the attack and recovery ramps are changed, providing the user with powerful choices.

Above a given threshold, signals are reduced by an adjustable amount ranging from 1:1, (which is linear, or no reduction at all), to more than 40:1 which is a very high ratio, equivalent to that of a Limiter. A compressor’s ratio is sometimes referred to as “Slope” because when depicted on a graph, the slope of the graph (representing Output vs. Input) is what changes.

Ratio and Threshold are closely inter-dependent. If a RATIO as high as 40:1 has been set, then if the THRESHOLD is set at 0 dBu, even when a massive signal of +40 dBu (unlikely!) is presented to the input, the output signal will only be +1 dBu. RATIOS as high as this would normally be set somewhere above 0 dBu – say at +14 dBu, in order to prevent the output signal level exceeding just over +14 dBu – to protect, for example, a digital recorder. Similarly, if a RATIO of 5:1 has been set, an input signal which is 10dB above THRESHOLD will only rise by 2dB above that THRESHOLD at the output.

The THRESHOLD control ranges from below -30dB to +22dBu. When THRESHOLD is set at a low level, with a fairly high RATIO the amount of gain reduction will be considerable and it may be necessary to use some GAIN after the compressor to restore the apparent signal level.

The ATTACK is the time taken for the compression circuits to start compressing. A long ATTACK time allows short duration peaks to “escape” and go through uncompressed. This may cause overload on subsequent digital circuits. A very short attack time sounds unnatural and robs the signal of some of its life by removing transients. Some transients are extremely fast and have little effect on the sound quality. Setting a long attack time often means that almost no gain reduction occurs because the transient is done before compression has had time to operate. However, even the fastest circuits take time to operate which means that there is always some “Overshoot”. Small amounts of “Overshoot” can be musically desirable, but listening is the only way to tell.

Setting the right values of RELEASE and ATTACK is what compression is all about! Once the principles are understood, a Compressor-Limiter such as the 5043 provides a powerful tool that actually appears to enhance the dynamic range of a recording and so provide greater musical enjoyment.

If the RELEASE TIME is set to be very short, a short duration signal will be compressed but the gain will return to normal very quickly, giving a fluctuating and unnatural sound known as “Pumping” when the background, or other signals, are forced up and down. The gain will also tend to follow the wave form of low frequency signals. RELEASE TIME should be set long enough for the gain to remain reasonably constant between each bass note or between speech syllables.

The notes above explain how the 5043 handles signals of constant amplitude such as pure tones. Real program signals, however, are continually changing in level. The way in which a compressor deals with actual program material depends upon the magnitude and duration of peaks in the program level. Feel free to experiment, and use the settings that sound good to you!

METERS A/B:
Monitors INPUT LEVEL and GAIN REDUCTION of either Channel A or Channel B.