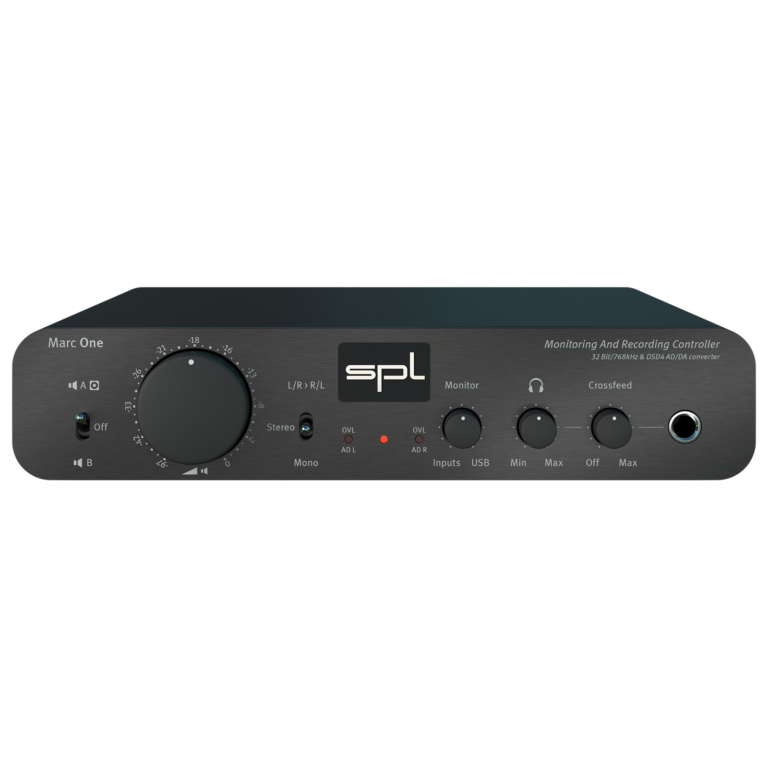 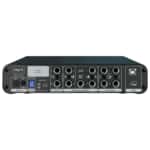 with innovative features and a 32-bit AD/DA converter. A monitor controller with which you can also record. And both in impressive sound quality.

number one in sound

For us the sound is always in the foreground. When it sounds good, we like to listen. To get such a sound, you need experience and technical finesse. We have incorporated both into the Series One.

You can listen to your production via two switchable pairs of speakers. A subwoofer is also switched on and off with speaker pair A.

In the middle position of the switch, the speakers are switched off, which is convenient because you don’t have to turn the volume control back.

You can adjust the volume levels at lightning speed with the Monitor knob. In the middle, all input signals are equally loud. To the left, the analog stereo inputs get louder and the USB input signal gets quieter.

Turning from the center to the right does the opposite. So you can quickly and intuitively set the right volume levels.

Two analog stereo inputs and one digital USB input can be connected to the Marc One. The DAW (Digital Audio Workstation) is preferably connected via USB.

Other players like CD player, mixer, synthesizer or an analog tape machine / tape deck can be connected to the analog line inputs.

The converter chip used is the superior AK4490, which belongs to the new generation of premium 32-bit DACs and is equipped with AKM’s Velvet Sound®. This technology makes the finest details audible thanks to its low-distortion architecture. Sampling frequencies up to 768kHz PCM (16x CD resolution) are supported and DSD (Direct Stream Digital) playback is supported up to DSD4 or DSD256 (11.2 MHz) resolution.

Thus the Marc One qualifies for the currently highest resolution audio playback.

The USB connection is Class Compliant. This means that all Mac computers and iOS devices like iPads and iPhones can use the full performance bandwidth of the AD/DA converter without driver installation. iOS devices require the camera adapter. For Windows, a driver is required, which you can download at the bottom of this page.

The Line Out carries the mix between the Line Inputs and USB playback and is controlled by the Monitor knob. The level is unity gain, thus independent of the volume control.

So the Marc One can be looped between devices without “losing” an output.

For example, if several people should listen in via headphones, headphone amplifiers can be connected to the Line Out. But you can also record the signal analog or send it to a mixer for further processing.

Are offered by the Marc One. In the middle is the default setting “Stereo”. To check the mono compatibility set the switch to “Mono”. The special feature is the channel swap function:

Reverses the stereo image. L/R becomes R/L. This is important and extremely time-saving when you are searching your sound library for samples in video dubbing that should match a scene with direction of movement.

If the direction is not correct, you usually will have to import the sample into the DAW to swap channels before you can hear and judge if the sample with reversed direction fits to the picture.

With the L/R > R/L function this is no longer necessary. You can now simply swap the direction of movement while pre-listening samples in the library.

Not here. Marc One delivers a rich headphone sound and it can get really loud.

The output stage of the headphone amplifier is designed as a push-pull amplifier in class AB mode. The bipolar transistors share the amplification of the positive and negative half-waves, which produces a higher gain and a higher output voltage than in Class A operation, where only one transistor amplifies both half-waves.

The output stage transistors are thermally coupled and thus run particularly coherently, which contributes to a consistent and stable sound image.

The power supply has a buffer circuit with low source resistance, ensuring generous current reserves even when driving low-impedance headphones.

In the headphone amplifier is the Phonitor Matrix, with adjustable crossfeed, thanks to which you can create mixes with headphones that sound the same on speakers.

In the Marc One, the center level is preset to -1 dB and the speaker angle to 30°. These are the most commonly used values. The crossfeed function determines the so-called interaural level difference.

If the active speakers or the power amplifier are very sensitive the playback may already be fairly loud when the Volume control is in the first third of its control range. By activating the -10 dB dip switch the output level is lowered to accommodate for a wider usable range of the Volume control.

With the Rec 1+2 dip switch both line inputs are mixed together and can be recorded via USB.

Good sound always starts with the power supply. This is where you lay the foundation for the performance of the entire device.

Although we “only” supply a 12 V plug-in power supply unit, the secondary power supply inside generates a voltage level of +/-17 Volts for the analog audio sections with which professional levels of up to +22.5 dB can be achieved!

The Marc One delivers full power when used with the included 1.5 A power supply. Only use the 12 V plug-in power supply unit within the scope of delivery. The ON-switch puts the Marc One into operation.

Reference: 0 dBu = 0,775V. All specifications are subject to change without notice.