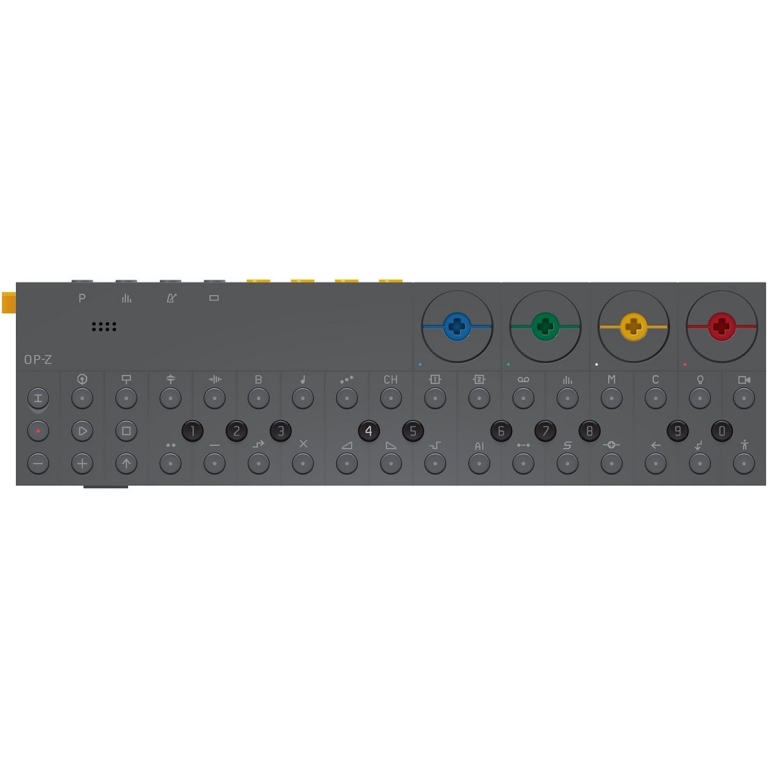 It’s been over six years since teenage engineering released OP-1, the revolutionary portable all-in-one synthesizer which has now become an icon in the music industry.to be honest, many were skeptical at launch, labelling it as a toy and not a real synthesizer because of its color coded knobs, its creative user interface, and for some it was just because of its size – a synthesizer has to be big to sound big right?
today, with the introduction of the all new OP-Z, we will push the boundaries even further. This time the machine is so small we guarantee it will upset you. it’s about half the size of OP-1, but comes with more dsp power that consumes less energy so now you can fly the atlantic 4 times back and forth, sequencing complete songs on 16 dedicated tracks before you run out of power. when ready to land, just slide it in your inner pocket.still, OP-Z is about a lot more than just composing music. The Z stands for the third dimension, the depth, the creativity involved in making music. imagine animated art and videos that accompany your live show, or sequenced lighting, all the way down to composing your own interactive software. some people would call a device like this a dream machine.
We call it OP-Z.

Centered around an advanced 16-track sequencer where all tracks run independently, OP-Z makes individual track speed and track length possible.in addition to this it’s possible to add unique step behaviours to every one of the 16 steps: a feature we call step components. think of this as dual layer sequencing where the first layer is a traditional 16 step sequencer, while the second layer adds variation per cycle, note variation, micro sequencing, direction, parameter changes, re-trig’s and much more, all on just one single step.in theory, it’s possible to create a complete song by programming only the 1st step of the 16, using multiple step components to create endless variations, a technique recommended for experts and engineers only. seriously, in some situations it’s actually almost impossible to predict the complete length of a sequence. so we created a special component for those situations named ’catch up’, that forces a track to exit at a certain step to stay in sync. in total, there are 14 components sorted into 3 groups: triggers, note variations and specials.

All 14 components have 10 values and behaviour programs. the product of all this is that you have 140 ways to alter just one single step. probably more than most people can handle.and to make step composing really intuitive and super fast, all keys are backlit with multi-color leds with instant machine feedback, a must-have for poorly lit club gigs and late-night-in-bed composing. actually, the print on the unit itself is made with a special glow-in-the dark-paint.a pretty cool ’world’s first’ for synthesizers.

OP-Z is a completely stand-alone synthesizer and composer, ready to to be used at anytime and anywhere, but for those of you who need that extra injection of vibrant graphics, interactive user interface and awesome synced animations to feel inspired, we introduce the concept of BYOS – bring your own screen. you already have the phone with that gorgeous retina display in your pocket, right?just download the OP-Z app, pair the two devices and you are all set. add cellular connectivity, wifi and powerful graphics processing to that and the concept certainly makes sense. All this tech when connected to the OP-Z adds several unique features. like using the phone’s camera, snapping a series of photos and arranging them to a beat, creating a synchronised music video ’a-la-minute’.
We support dropbox on ios as well, so transfer of your custom artwork on to your ios device will be instant and without cables. To eliminate any latency between image and sound, we ported the OP-Z sound engine to run simultaneously on your ios device. Something we call ’dual domain synthesis’.

Snap a series of photos and sequence them to a beat. compose a song and create a completely synchronised music video ’a-la-minute’.the included photomatic feature is just pure instant fun.

By adding any artwork or a photo to your ios device camera roll or to a dropbox folder, you can create high quality custom graphics, patterns, color palettes or stop motion videos. anything can be animated in pace with your music.

create your own world

OP-Z is tailor made for unity 3D, the world’s most popular multi-platform game engine. chosen because of its intuitive workflow and excellent VR support. a dedicated OP-Z toolkit for unity will be available at launch that opens up the entire machine.

Teenage engineering have worked closely with keijiro takahashi and the unity tokyo studio to fully integrate OP-Z with the unity game engine. As keijiro-san is both a full time software evangelist at unity and a renowned VJ at night, we have had access toa selection of keijiro-san’s personally developed tools and shaders which deliver stunning 3D graphics that run at full speed on iphone or ipad. Keijiro-san’s tool-set and real life experience in performances with motion graphics have been invaluable in making OP-Zan inspiring live tool for moving images in sync with music. The weakest point of VJ-ing has always been the creation of content. by exposing the inner control data of the OP-Z and linking it to unity, users can create anything within unity, build the project and just drop the build to a dropbox folder. Customizing every single polygon in a performance.

The new tape feature is probably one of the coolest sonic features of the OP-Z. imagine a short snippet of tape secretly recording every thing that isprogrammed in the sequencer – all in realtime. and with its own dedicated track it’s possible to sequence the tape, trig the in-point, length and speed. OP-Z will come with a range of tape reels with unique character and functions. Scrub, scratch, wind-up and mess-up!