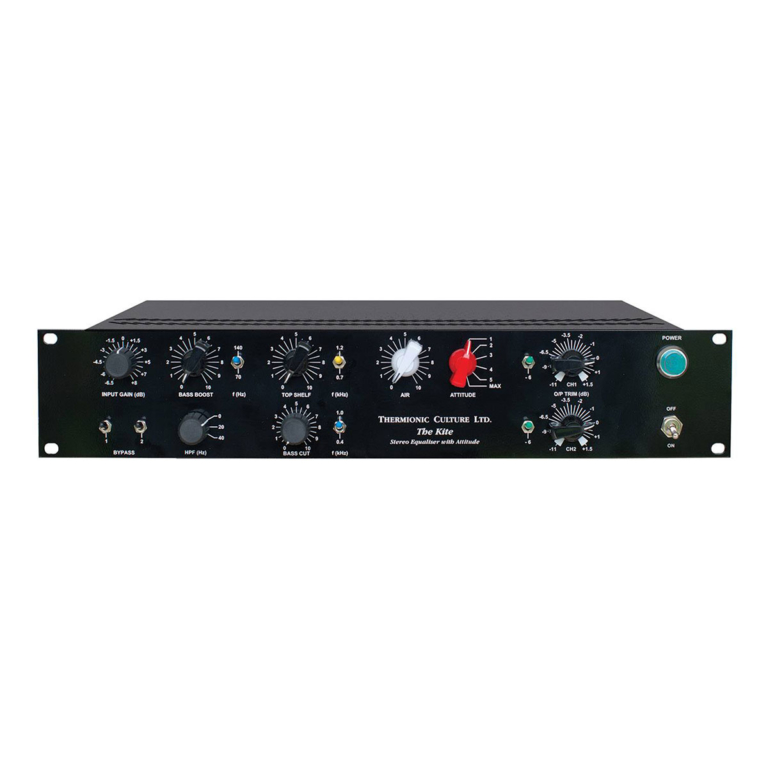 The Kite has been developed by Thermionic Culture in response to requests and feedback from many of our customers.
Familiar features include the “Attitude” control and broad, effective EQ in a 2-channel format.

The sound shaping controls are all dual channel controls, allowing the user to make fast, intuitive changes to the stereo mix without having to check alignment between channels. However, there are independent output level controls should any adjustment need to be made to the left/right balance.

The “Attitude” design is taken from the Fat Bustard and allows the Kite to be run as a very low distortion device or to be progressively made richer in 2nd harmonic content as the “Attitude” control is increased. We should point out that this “Attitude” circuit is unique to Thermionic Culture Ltd.

The type of valve used is critical to the success of the sound in adding useable and desirable harmonic content to the signal without incurring any noise or headroom issues. It was selected for several electronic properties that it has and also through many careful listening tests that proved it simply “sounded right” when used in the “Attitude” circuit.

The effect of adding 2nd harmonic content to the stereo mix bus is well known to bring extra dimension and character to the sound. There is also a subtle squeezing of the dynamic range due to the saturation of loud peaks and transients in the stereo signal. This can be very beneficial when used judiciously to achieve a louder overall mix, rather like the effect of running a mixing console’s stereo mix bus just to the point of saturation. However, the valve circuitry will inherently give a larger, more forgiving range within which to utilise the saturation than any solid-state console could provide.

The EQ section of the Kite is also inspired by the Fat Bustard EQ section but has been developed further.

The “Bass boost” control has 2 frequency positions with Thermionic Culture’s own “varislope” EQ curves and there is also a continuously variable shelving “Bass Cut” control. This gives fine control over the type of bass that can be added and the interplay between the “Bass Boost” and “Bass Cut” provides unique shaping possibilities for the low end. For example, the “Bass Cut” can be used to subtly tighten up the bass end when applying bass lift or it can be used to provide a simultaneous low midrange cut and low bass lift, in varying degrees.

The “Top Shelf” control is now brought right down into the midrange with 2 frequency choices, allowing a very broad musical lift of a wide band of frequencies in the mid to high end of the spectrum. This can be perceived as an intuitive and musical approach to stereo EQ as there is no peak or centre frequency that becomes dominating when EQ lift is applied, just the smooth addition of presence to the musical content in the selected range.

For control of the very high end there is a rather special “Air” control. This is a transparent sounding control that gives additional openness and sparkle to the sound. It makes the sound so clear (at Att 1) that there is almost zero phase shift in the whole audio spectrum when this control is set to 5!

If the user wishes to use a lot of “Attitude” and gain to achieve a more saturated, dense sound, the “-6dB” switches are there to ensure the output controls stay within any easy to adjust central range of the control.