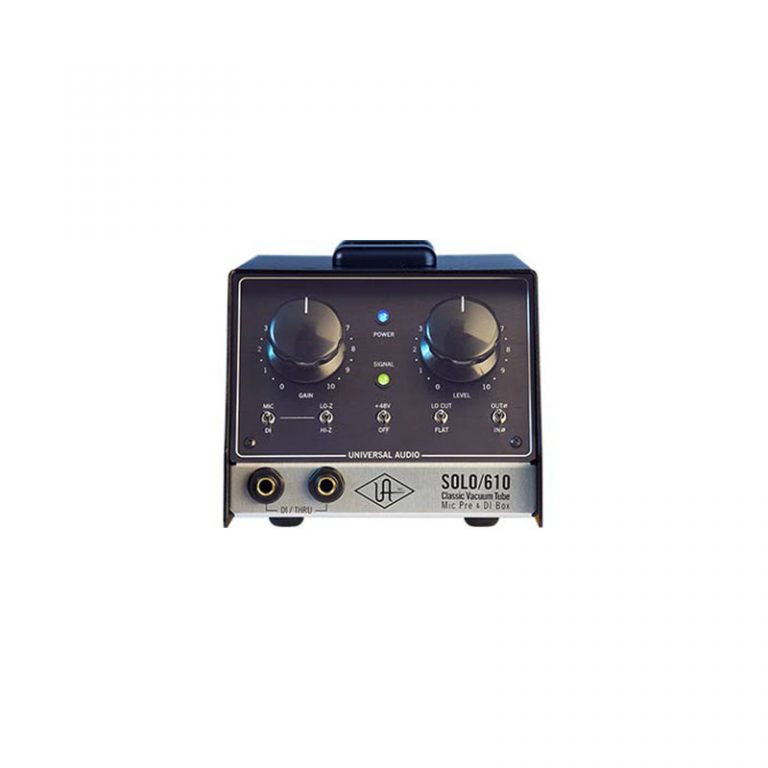 € 1.099,00 For European customers, please select your country to view the correct price including vat

The SOLO 610 delivers the classic Putnam 610 console sound to the single channel format in a rugged, highly versatile form factor, at a price every project studio can afford.
The all-tube SOLO 610 provides the silky vintage warmth of the original UA 610 console used by artists ranging from Sinatra to Van Halen. The SOLO 610 will flatter the cheapest to the most esoteric microphone with its signature sound. Unlike stationary rack gear, the SOLO 610 can be conveniently used in the control room or recording room, on stage or desktop, due to its portable “go anywhere” design.
Functionally lean but sonically mean, the SOLO 610 was carefully created to maintain all of the character of its vintage predecessor, and has the same solid build and audiophile components professionals expect from its more expensive UA siblings like the 2-610 and M610.

The SOLO 610 offers Mic and DI inputs, and features Gain and Level control for a wide variety of clean to colored tonal shaping.
Unlike its predecessors, the SOLO 610 has continuous a Gain control with even greater range, allowing for more precise gain structuring and doubles as input signal padding.
The SOLO 610 has all the essential features like 48v Phantom Power, Lo Cut filtering, Phase Reverse, and for even greater tonal variety, maintains the 610’s flexible dual impedance selection for both Mic and DI inputs. The SOLO/610 also includes essential DI features like Thru for when used in conjunction with an amplifier, plus Ground Lift and and a versatile Mic/Line level output switch. The SOLO 610 is hand-assembled by Universal Audio in the USA.