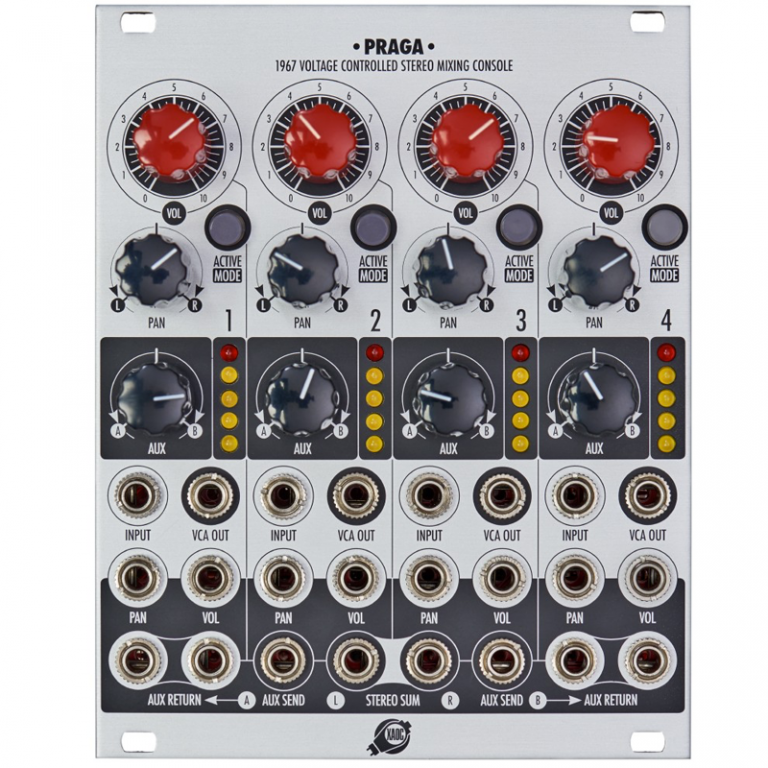 € 480,00 For European customers, please select your country to view the correct price including vat

The Praga is a four-channel stereo mixer with volume and panorama potentiometers plus a mute button per signal path. CV inputs allow users to modulate the first-mentioned parameters. LED meters visualize the level of each channel. Effects can be connected via two auxiliary sends. Direct outputs emit results of individual signal paths.

In use, the Praga shines with natural, clean sound and a very low noise floor. Gimmicks in the circuit design make it possible to create soft compression and overdrive effects. Thanks to its well-arranged front panel, the module is equally suited for studio and live setups. Several Pragas can be connected to create bigger mixing setups.

The Praga 1967 Voltage Controlled Mixing Console comes equipped with four channel strips. Each audio path features an input, potentiometers plus CV connectors for altering the level and panorama as well as a mute button. Additionally, there is a level meter (post-fader) per channel, composed of five LEDs. Two sockets (left / right) emit the sum of all audio paths. On top of that, each channel offers a direct output. It is fed independently from the master bus, meaning sum and direct out connectors can be used simultaneously.

For routing audio material to either of the auxiliary sends, the Praga features four more potentiometers. – One per channel. As long as the control elements are in middle position, none of the aux channels is fed. By turning the knob to the left respectively right, users can send audio material to the first or second auxiliary path. Audio material is tapped off behind the level control section. Each aux send comes equipped with one output and two inputs (left / right). The latter pass incoming signals on to the stereo sum.

The Praga offers two modulation modes for altering the volume. Users can switch between them by pressing the mute button of the corresponding channel for a few seconds. The control element’s background lighting visualizes the currently active mode of operation:

In case incoming control voltages are stronger than the maxima mentioned above, the Praga dynamically attenuates them. Results sound somewhat like compression. The mix bus is equipped with a soft clipping stage, which adds overdrive to signals above 16 Vpp. Thanks to short fades, pressing the mute buttons while playing does not result in clicks.

Several Praga modules can be chained via ribbon cables.