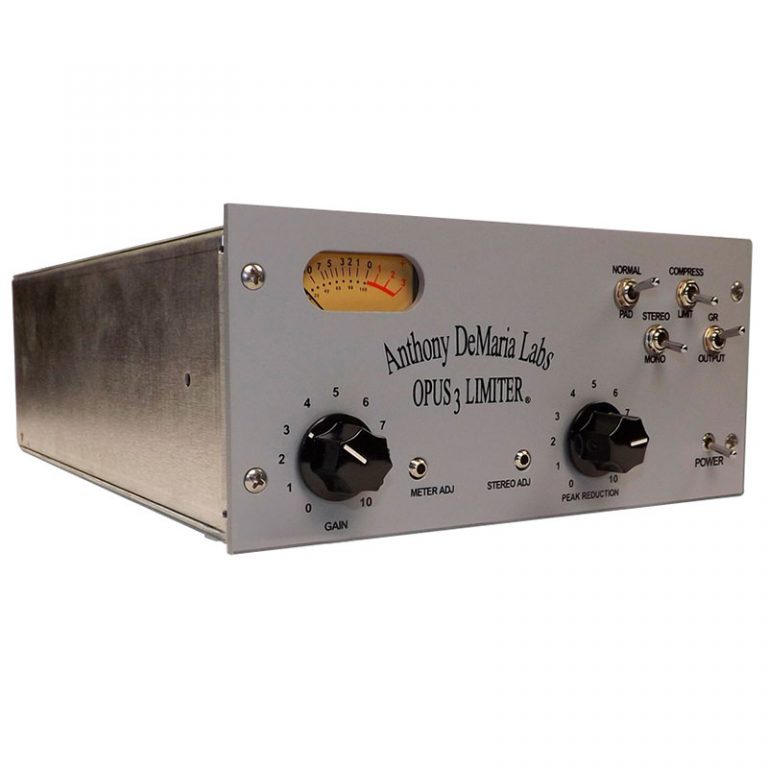 € 1.329,00 For European customers, please select your country to view the correct price including vat

The ADL Opus-3 broadcast Discrete Optical attenuator compressor/limiter is a close cousin to our world famous ADL vacuum tube1000 and 1500. The Opus-3 is an all discrete solid-state design commonly referred to as a fixed gain circuit. The heart of the Opus-3 is our custom hand matched optical attenuator, same one found in our world renowned 1000 mono and 1500 stereo limiters. Hand matching components allows us to create a unique soft knee compression characteristic representative only of the ADL brand. Although time consuming, choosing Identical parts results in consistency and reliability for all our valued clients, engineers and producers.

The Opus-3 has many practical application allowing engineers and record producers flexibility in the studio. From tracking, mixing, vocals, instruments, stereo buss, and live concert sound reinforcement to film and broadcast work.

GR/Output Switch
Two position switch linked to the VU meter indicating either the amount of level or the amount of peak reduction. Set to output, the GR/Output Switch meter will indicate overall level from rear XLR input to output. Zero VU is equal to +4 dBm on the output XLR. Meter motion will appear to bounce toward the right side according to varying levels or gain.

Set to GR the meter will start at zero VU and move toward the left side as peak reductions is increased. The amount of meter deflection is commensurate with peak levels. When a desired amount of compression is reached, switching back to output may indicate a lower level and may require more level or make-up gain.

Finding a happy medium or “sweet spot” between the amount of gain and peak reduction is subjective and according to your personal musical taste.

Limit/Compression Switch
Changes the sonic characteristics of the compressed signal by changing the ratio. For instance, gentle compression may have a ratio of 3:1 (a 3 dB increase at the input will result in a 1 dB increase at the output) while heavy limiting may have a higher ratio of 8:1. The VU meter typically indicates two types of levels, RMS (Root Mean Squared) and peak. RMS is a combination or average of all the wave forms displayed on the VU meter and a function of the loudness of the music. Reducing RMS or overall loudness is best served by the compression setting.

Peaks or transient spikes are not average and can quickly distort great performances. Sharp transients may cause clipping and are capable of appearing or riding above RMS and are best served by the limit setting.

Normal/Pad Switch
Attenuates the level or gain from the input XLR to the input audio transformer by 14 dB to prevent distortion or clipping. For instance, disconnecting from a line level source (typically operating at +4 dB) and connecting to a hotter guitar amplifier would typically require this pad.

Stereo/Mono Switch
Two Opus-3 limiters can either be configured as a stereo pair or two independent mono channels. Stereo linking, connect both units via a 1/4” guitar cable (12” long) and switch in the up position. For mono use, simply return both switches to the mono setting. 1/4” stereo link jacks are located on the rear panel. For accurate stereo operation, please make sure both gain and peak reductions knobs are positioned the same on both channels.