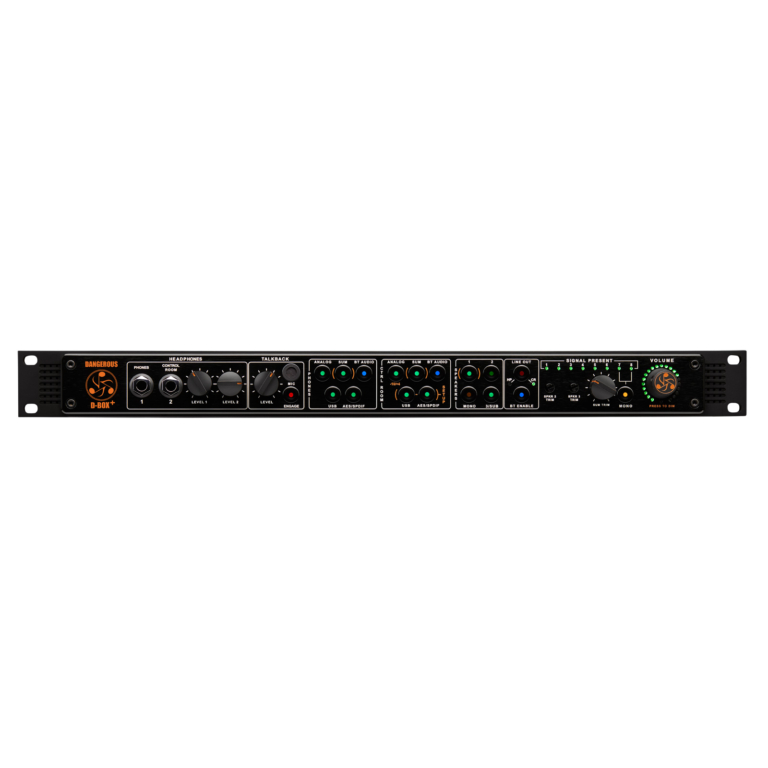 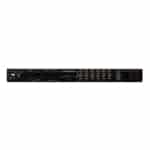 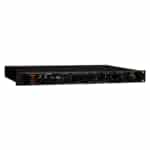 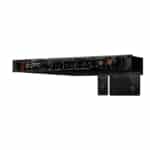 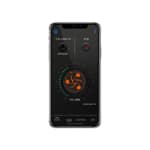 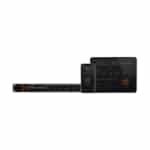 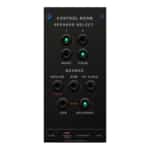 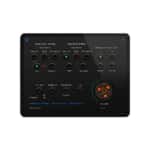 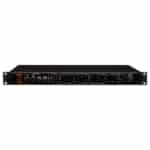 The Dangerous D-BOX+ is a ground-up dramatic redesign of the award-winning controller and summing mixer that provided countless studios the superior sound and versatile control of an analog mixer, all in just one rack space. The newly designed 8-channel summing mixer and D-A stereo converter provide Dangerous Music’s bold and clear sound, while newly added features like Bluetooth connectivity and an app for remote control of all major functions unleash a cutting edge feature set that puts the D-BOX+ far ahead of the competition. As with all Dangerous Music products, the D-BOX+ is proudly made to exacting audiophile standards in the USA.

TOTAL CONTROL in the sweet spot

Like a large console’s center section, the D-BOX+ provides elaborate routing and switching of your studio’s inputs and outputs, both analog and digital. At the push of a button, you can select from five input sources: analog stereo, the onboard analog summing mixer, USB, AES/SPDIF and brand new for the D-BOX+, a wireless Bluetooth stream from any Bluetooth-enabled device. Outputs include three stereo speaker ports, and these can be programmed to be mono and/or to include a subwoofer. Further, you can use output 3 as source for an independent sub with individual level and mute control.

Any studio situation, but especially tracking sessions, call for independent monitor routing for artist and engineer. With the D-BOX+ you have two totally independent monitoring sections: Control Room and Headphones. With the simple push of a button, you can assign any of the five input sources to either of these monitoring paths, making what would otherwise be elaborate patches into instant choices. Want to check on your monitors what your artist is hearing in their headphones? Seamless source switching is simple.

REMOTE CONTROL VIA BLUETOOTH AND THE D-BOX+ APP

Using the new D-BOX+ Bluetooth app, on any current phone, tablet, or computer, you are no longer bound to your chair when you need control your studio. All major functions of the D-BOX+ show up in the highly intuitive and rock solid program, providing limitless new solutions to age-old studio problems. Want to listen to an artist’s instrument in the live room while switching monitoring sources in their headphones? No problem. Want to give a couch-bound producer control over the talkback mic through their phone? Simple. Want to listen to your mixes from the hallway while still swapping monitors or switching a sub in and out? You got it. If you can dream it up, the D-BOX+ app will deliver.

Our D-A converters have been at the heart of award winning tracking, mixing, and mastering studios for decades. Advanced clock stabilization, top-of-class chip sets, and our uncompromising analog signal path add up to a D-A that’s as powerful as it is nuanced. Clarity and musicality of your digital sources are no longer trade-offs, but will come together for the best possible monitoring available in any price category and the D-BOX+ is loaded with three: USB, AES/SPDIF and Bluetooth.

USB audio connectivity has come a long way over the past decade, and Dangerous has been at the forefront of its development the entire time. With the D-BOX+ you not only get an ultra-fast, low-latency USB port, you also get the latest driverless connectivity on macOS and flawless driver support on current Windows computers. Say goodbye to fussing around with software just to get up and running, and say hello to plug-and-play connectivity.

DAWs are incredible tools, but they don’t offer all the tools you need to make your studio sessions run like clockwork. The onboard talkback mic of the D-BOX+ offers a simple, time-honored solution to one of a studio’s most basic needs. Now that you can control that talkback mic from anywhere via the D-BOX+ app, you’ll find yourself waving your arms far less and communicating more effectively with your collaborators.

Anyone who has heard what a Dangerous summing mixer can do to improve the sonic impact, panning, depth, and width of a mix knows that there’s no substitute for analog summing when its done right. We’ve heard stellar results from traditional routing of subgroups to separate analog channels all the way to routing multiple effects returns to their own analog paths for unrivaled dimensionality. Mixing is an art form, and our analog summing mixer will help you create masterpieces.