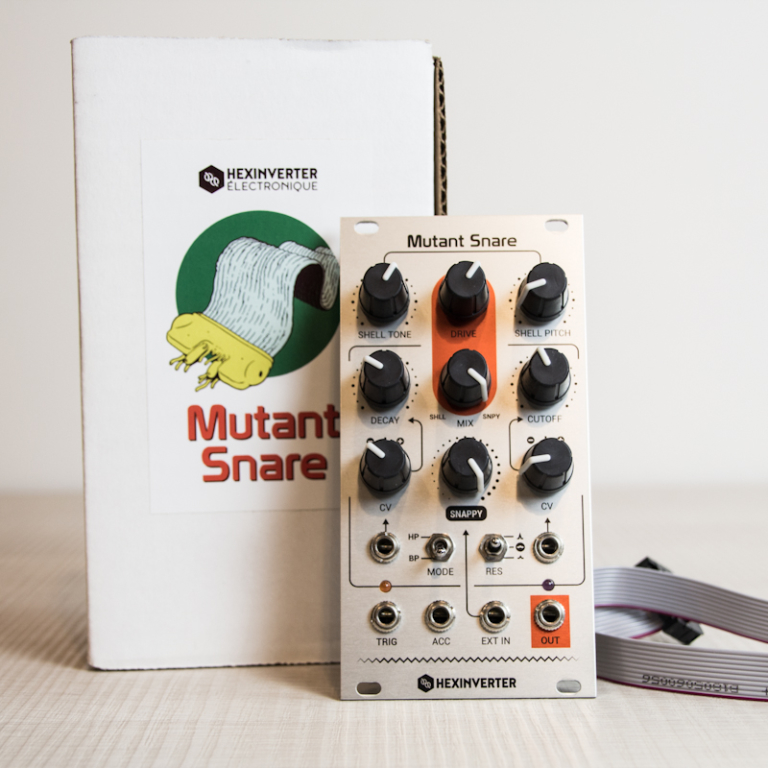 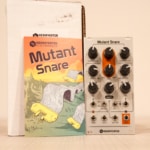 Mutant Snare is a well-equipped and complex drum voice

Mutant Snare is a well-equipped and complex drum voice

Like all of Hexinverter’s Mutant Drums also the Mutant Snare is a well-equipped and complex drum voice. It is entirely analog and based on the 808’s snare drum but has been extended, be it by voltage control of some parameters, overdrive, a filter with different characteristics and an audio input for replacing the snappy noise by other sounds.
In short words: it produces various sounds, from classic analog snares to weird and extreme alien percussion.

Basically the Mutant snares consist of two sound generating sections: the drum body “Shell” and the noise floor “Snappy”, between which you can crossfade with the MIX potentiometer. The Drive parameter overdrives the snare sound and adds harmonics.

SHELL: synthesizes the drum skins and beses on analog t-bridge oscillators which already made the 808 sound so organic and deep.
The TONE potentiometer controls the timbre of the drum and PITCH its frequency.
SNAPPY: Emulates the snares of a real snare drum and is based on analog white transistor noise – patch any external audio signal into the EXT IN to override and to replace the internal noise.
DECAY controls the decay time of the drum, which can be voltage controlled as well.
The Snappy signal passes a filter which has selectable characteristic: either high pass or band pass. The cutotff frequency is voltage controllable. If nothing is patched to the CV input either the snappy envelope or the Shell’s sine wave are used as CV sources due to normalizations. Select between three resonance settings: low (like on the 808), high or self oscillation.

Both CV inputs are equipped with polarizers to scale the modulations. There are both a trigger input and a accent input.