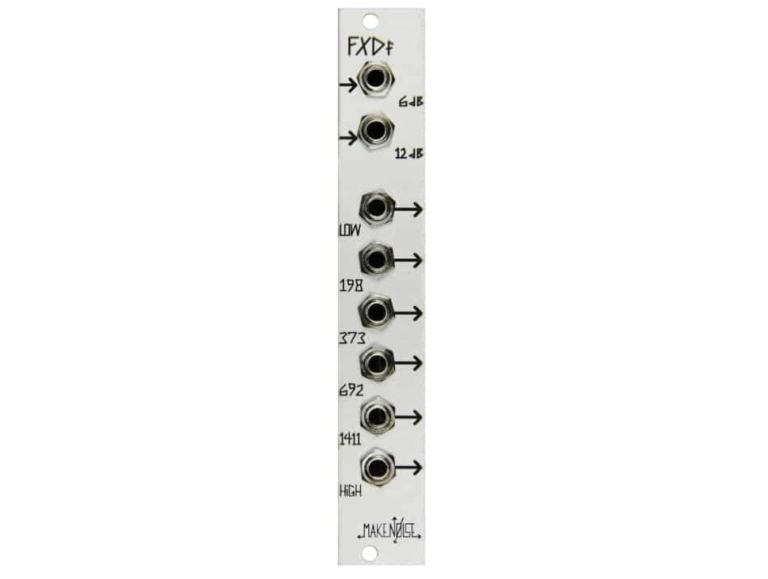 The FXDf is a 6 Band Fixed Filter. Traditionally fixed filters are large modules having 8 to 10 bands, each with a manual level control, but rarely any voltage control. The FXDf is so small we had to abbreviate the words Fixed Filter and by providing individual outputs as well as a header for normalled connection to our RxMx 6 channel macro-lowpass-gate module, voltage control over level of each band is possible through patching. In the past the Serge System Fixed Filter used 6db/ Octave filters while the Moog Modular used 12db/ Octave filters. We liked the sound of both filter slopes, so we implemented a way to use either or both simultaneously. In this way the FXDf also allows for blending of two audio signals. We selected 6 bands we found to produce the most sonic energy in typical Make Noise system patches and also took care to space them wide enough that each of the bands could be distinct from the others. This makes for quite an impactful sound when independently modulating the amplitudes of the 6 bands using the RxMx or VCAs.

– Simultaneous 6db/ Octave and 12db/ Octave inputs
– 6 filter bands spaced at 11 to 13 semitones and cover a range of 6 octaves
– Useful for isolating a particular portion of the spectrum for mixing and analog or digital signal processing
– Individual output for each filter band
– Expansion header for normalled connection of 6 FXDf outputs to 6 RxMx inputs allowing for voltage controlled, percussive spectral animation
– Pairs well with the RxMx