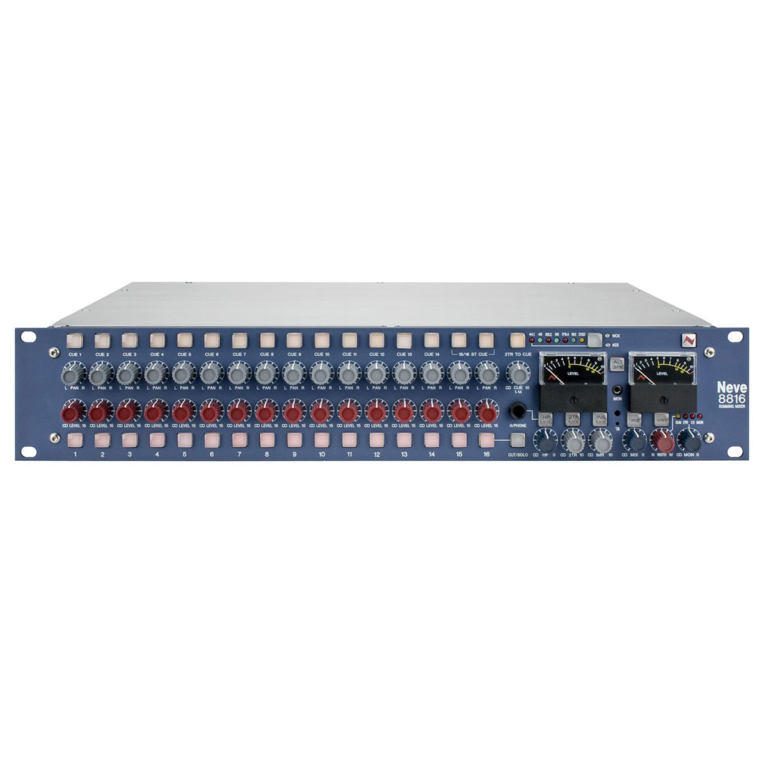 € 3.110,00 For European customers, please select your country to view the correct price including vat

The sound of Neve has been the audio recording benchmark for generations of leading engineers, musicians and producers.
Wherever sound matters, from a full orchestral recording for a blockbuster film to a lone singer, from a rock drummer to an R’n’B vocal, Neve technology provides the warmth, punch and definition so sought after by modern and classic producers.
The legendary sound of Neve now becomes available to DAW based producers with the launch of the Neve 8816 Summing Mixer.
Comprehensive input, mixing and monitoring functions upgrade a DAW to a professional mixing facility.
The sixteen input channels include level, pan, cut and cue controls. A 15dB gain range accommodates both -10dBv and 4dbm input levels.
If sixteen inputs aren’t enough for your mix, multiple 8816 units can be cascaded together via the fixed level two track buss.
The ultimate analogue mix buss utilises classic Neve transformer mixing topology.
The mix outputs appear simultaneously as balanced 4dBm and unbalanced – 10dBv. Mix Inserts are pre-fade for full control and can be switched between normal insert mode and mastering style sum and difference mode with stereo width control.
A post insert mix function can be used for mixing in a separate stem or blending the mix with a special effect. An optional digital output converts the analogue mix to any standard PCM sample rate up to 192kHz or DSD, a unique feature extending Neve’s commitment to the ultimate analogue and digital sound.
Output PPM meters are complemented by overload LEDs to indicate clipping at the ADC or analogue output. The monitor section selects between Mix Out, 2 Track Return, Channels 1 & 2 (DAW mix replay) and “i-mon” front panel input min-jack, handy for quick mix comparisons.
The monitor level is independent of the mix level and the monitor outputs can be switched between Main and Alt speakers. A separate Cue Output can be fed from three sources and the inbuilt Talkback mic. Headphones can be used to listen to either Cue or Monitor source.
The final touch? Total recall! A USB connector allows snapshots of the 8816 setting to be saved to a PC and recalled ready for remix!