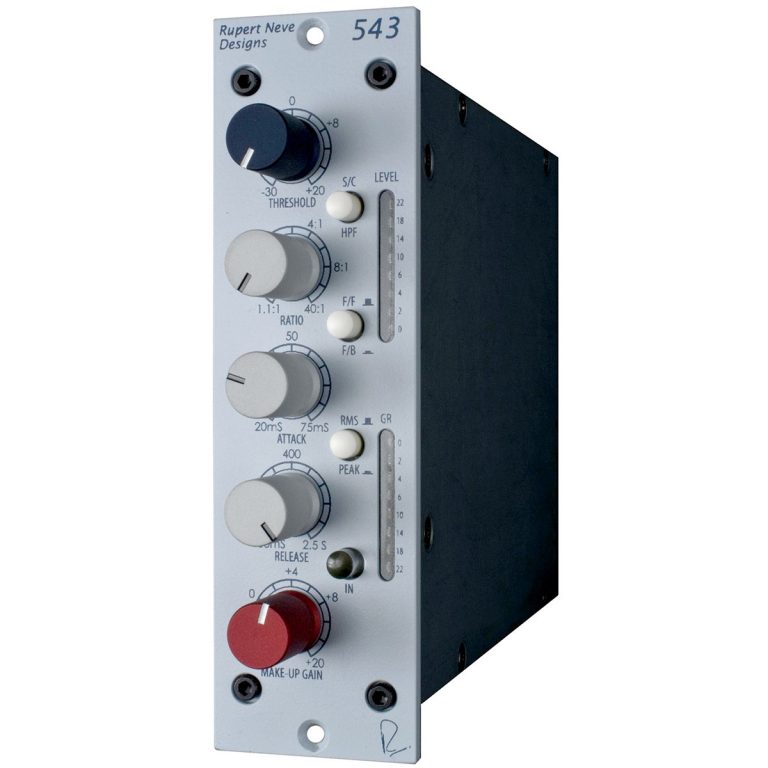 € 1.079,00 For European customers, please select your country to view the correct price including vat

The 543 Mono Compressor delivers the unobtrusive, musical-sounding dynamic control and brick-wall limiting made famous in the Portico 5043 to the 500 series format. The 543 features a fully controllable compressor-limiter with feed-forward / feedback modes, Peak / RMS detection and a built in side chain high pass filter. With an unrivaled heritage and a tremendous feature set, the 543 yields a combination of rich warmth, flexibility and precision that is sure to resonate in the ears of sound engineers the world over.

Built around Mr. Rupert Neve’s custom transformer designs, each 543 module encompasses individually controllable threshold, attack, release, makeup gain, ratio, side chain HPF, Feed-Forward / Feed-back selection and Peak/RMS detection modes. With the compressor inactive, the 543 may be used as a transformer-coupled, high-performance line amplifier, and two 543 may be linked for stereo operation as well. The chassis is built to standard 500 series specifications, with power and I/O provided by the rack.

In order to control gain, a V.C.A. or Voltage Controlled Amplifier (or Attenuator) is used. There are many types of V.C. including the use of tubes, discrete and integrated solid state circuits and naturally non-linear devices, each one having its characteristic behavior that reflects sonically on the final performance, and gives it a character or signature that can be musically attractive or not! The 543 makes use of a very accurate, low noise, low distortion V.C.A. having, essentially, no signature of its own.

The 543 also has the ability to switch between feed-forward and feed-back modes. If the V.C.A. Control voltage is taken from the 543 output, (i.e. after the V.C.A.) it cannot act immediately on the V.C.A. because it has already been modified by settings of the V.C.A. and circuits through which it has passed. This is known as a “Feed-Back” compressor. The two compression characteristics are quite different; there is more “Overshoot” and both the attack and recovery ramps are changed, providing the user with powerful choices.

In most of Mr. Rupert Neve earliest designs, feed-back detection controlling the VCA with a rectified voltage from the unit output was intrinsic to the musical dynamic response. However, the very nature of a feedback compressor limits the attack time of the compression circuit. To offer faster, more technically accurate response times, feed-forward detection was implemented on Mr. Rupert Neve’s more modern designs. With the FF / FB switch, both classic and modern VCA responses are available.

One of the more unique features of the 543 is the new Peak / RMS mode also found in the Portico II Channel. This switch allows the VCA (voltage control amplifier) to respond to both RMS (Root Mean Square) and peak levels. RMS circuits are considered to better mimic the way the ears perceive apparent loudness, while peak circuits tend to directly respond to the waveform voltage which may be more of a concern for prevention of clipping and maximizing levels. In this case, peak mode uses a combination of both methods to get the best of both worlds, and avoids the drawbacks of each method on its own.

Setting the right values of RELEASE and ATTACK is what compression is all about! Once the principles are understood a Compressor-Limiter such as the 543 provides a powerful tool that actually appears to enhance the dynamic range of a recording and so provide greater musical enjoyment.

The notes above explain how the 543 handles signals of constant amplitude such as pure tones. Real program signals, however, are continually changing in level. The way in which a compressor deals with actual program material depends upon the magnitude and duration of peaks in the program level.