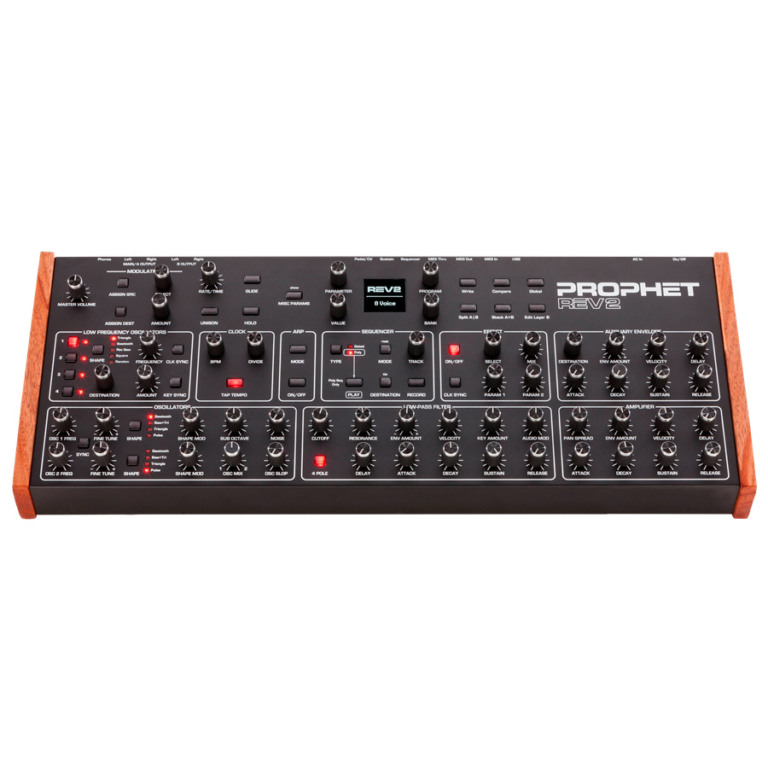 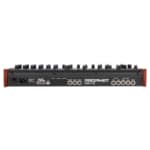 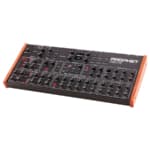 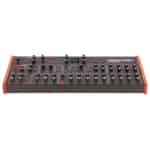 The 8 voices of Prophet Rev2 Desktop consist of 2 digitally controlled analog oscillators (DCOs). Both oscillators offer 4 waveforms : sawtooth, sawtooth + triangle, triangle and pulse. The Prophet rev2 oscillators are extremely stable, but if you are looking for the inaccurate sound typical of vintage analog you can take advantage of the Osc Slop potentiometer to gradually introduce a random detuning. One of the important innovations introduced by this revision 2 is represented by the two potentiometers called Shape Mod . With these you will be able to model the amplitude and shape of the wave generated continuously on each oscillator, to draw on an extremely wide sonic palette. By pressing the Sync button we will force the wave of oscillator 1 to follow that of oscillator 2, thus obtaining a more complex and rich in harmonics sound. A noise generator (White) and the Sub oscillator are inevitable: a square wave tuned one octave lower than oscillator 1 useful for recreating round and deep bass. The Pan Spread function that we find within the Amplifiers section gives us the possibility to expand the stereo image of the sound generated by positioning the individual voices in a scattered way in the panorama.

The Unison key allows you to play up to 8 voices simultaneously , with the freedom to assign the amount of detune between one voice and another in order to support you in programming very full-bodied sounds. Pressing it while playing a chord, the same button will activate the Chord Memory function, thus memorizing the intervals between one note and another, and then transposing and reproposing them following the (fundamental) note you will play.

The Sequential Prophet Rev 2 is Bi-timbral

Sequential Prophet Rev 2 in module version with 8 polyphony voices is a powerful bi-timbral analog synthesizer, this means that the instrument is able to reproduce two sounds independently. It’s like having two Prophet Rev 2s with 8 dedicated polyphony voices for each sound at your fingertips. The two Layers can be played in Stacked mode, in which the two sounds are reproduced simultaneously for the entire range of the keyboard, or in Split : one sound is assigned to the upper part of the keyboard and the other to the lower part. Each Layer has its own distinct life. BPM, Effects, Unison, Arpeggiator and Sequencer can also be programmed for each sound in a different way, without interfering with each other: two instruments in one .

The warm, unique and punchy sound of this prodigious synthesizer is also the result of its analog filter: a switchable 2 or 4 pole resonant low pass. Like so many successful vintage or modern analog instruments, the Prophet Rev2 filter also bears the signature of the late engineer Doug Curtis. In the filter section of the panel of this synth there is also the Audio Mod potentiometer, which allows us to adjust the amount of audio arriving from oscillator 1 useful for modulating the filter cut-off to obtain a movement on the harmonics of the upper part of the sound spectrum, a particularly appreciable effect when we are in 4-pole mode with light values of the resonance parameter.

Although the sonic character of the 8-voice Sequential Prophet Rev2 Desktop is determined by its analog oscillators and filters, much of its power to create unique and unusual sounds comes from the creative use of its modulations. The 4 LFOs offer five waveforms: triangle, sawtooth, inverse sawtooth, square and random (sample & hold). Three 5-stage envelopes: D (delay) -ADSR. One dedicated to the filter, another to the amplifier and the third assignable. There are 22 sources from which to draw modulations and 53 destinations that you can modulate. The Modulation section allows us to program these modulations in an intuitive way in a very simple way, by pressing and touching the parameters that we want to connect to each other via Source, Destination and Amount.

The Effects of the Sequential Prophet Rev2 Desktop

The built-in multieffect gives us one of a choice of the following effects that can be applied on each Layer: reverb, delay (standard and BBD), chorus, phaser, flanger, ring mod, distortion, and a high-pass filter. In Stacked or Split mode you can then apply a different effect on each of the Layers. For even more extreme sound design, all effect parameters can be modulated through the dedicated matrix.

The Sequential Prophet Rev2’s programmable arpeggiator can be configured in the classic Up, Down, Up + Down, Random successions and the order in which the notes are played by us.The notes generated by the arpeggiator and Sequencer can be transmitted to the MIDI OUT; through the dedicated Global setting we will have a way to decide whether to send them either via DIN, via USB, or only to one of the two options. Arpeggiator and Sequencer are both synchronizable to external MIDI Clock or internal Master Clock with Tap Tempo.

Inside the 8-voice Prophet Rev 2 Desktop we find a Sequencer with two distinctly different modes. The first is the Polyphonic mode where we can record up to 64 steps with a maximum of 6 notes per step. This mode will allow you to bring to life even very complex rhythmic and melodic sequences. The second mode is the Gated mode: unlike the Polyphonic mode, it allows us to record up to 4 tracks of 16 steps each. In this mode, the Sequencer will not transmit notes, but rather allow us to store changes in Synth parameters step-by-step.

The controls of the 8-voice Prophet Rev2 Desktop.

Panel puts as many as 55 potentiometers at our fingertips for immediate access to almost every parameter of the instrument. Included are 512 permanent factory presets and 512 rewritable user programs. All this polyphonic power is packed into a compact desktop module measuring 54.8x20x8.4cm and weighing 3.4KG. Other features that make it an ideal instrument for concerts or studio recording include a built-in power supply and an intelligible OLED display.

The connections of the Sequential Prophet Rev2

A Pedal/CV Input is used to connect a standard expression pedal (¼” TRS jack) assignable through the modulation section to control various parameters, or a CV audio signal (max. 5V peak-to-peak). Natural the presence of a ¼” TS jack input dedicated to a sustain pedal and another input called Sequencerdestined to connect a footswitch or to receive a CV audio signal for start/stop of the sequencer, arpeggiator or other functions indicated in the manual. For MIDI connection we have In, Out and Thru DIN format and a USB type B port for two-way communication with PC and Mac computers.