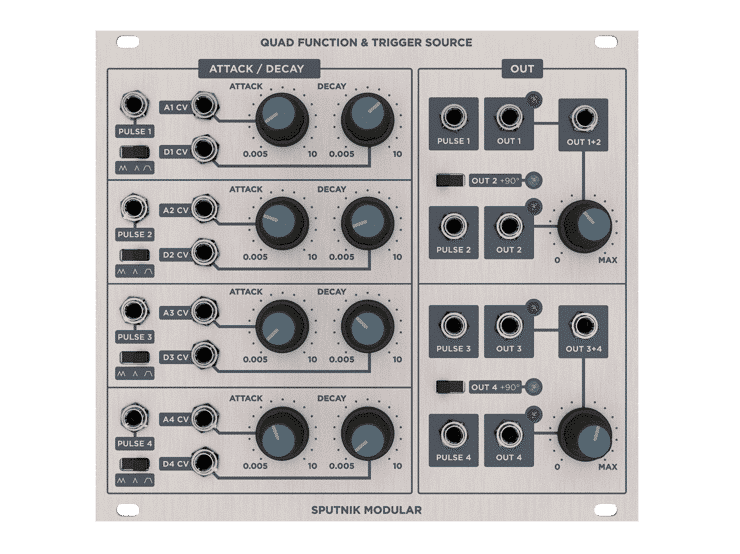 This module contains four voltage controlled function generators that can be used in pairs, in order to mix them and additionally to create more complex envelopes in quadrature mode. Each channel can be used as an AD envelope or as LFO and also generates pulses.

Each channel of the QFTS is an individual function generator that, when having received a pulse at it’s input, will generate an attack-decay cycle. The attack and decay times go from 0.005-10 seconds and each can be voltage controlled. When the AD-cycle is finished, a pulse will be generated at the pulse output. In cycle mode (see below) this output can be used as square wave LFO with a pulse width depending on the relationship of attack and decay times.

A switch selects between one of three modes of operation:
Cycle: The attack/decay cycle is repeated and the function generator turns into an LFO that’s wave shape and frequency is dependent on the settings of A- and D- potentiometers.
Attack-Decay envelope. ignores the length of input pulse.
Attack-Hold-Release envelope: stays in sustain/hold as long as the pulse is active.
The mix of channels 1+2 and 3+4 is available at mix outputs in the OUT section. Activating the “+90°” switch will put the according two channels into quadrature mode where channel 2 is phase shifted 90° compared to channel 1 (analogical behaviour with channels 4 and 3). This makes it possible to generate envelopes more complex than Attack-Decay or Attack-Hold-Release.