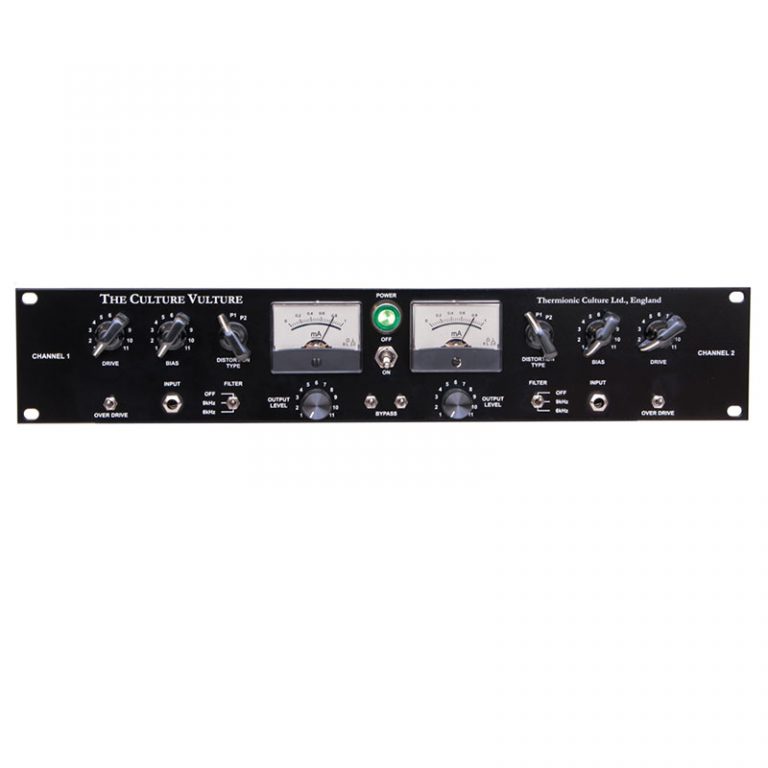 The Culture Vulture – 2 channel all valve distorter/enhancer
This is the original and still the only studio unit dedicated to just adding valve produced harmonic distortion to sounds, with no solid state components in the way. This unique unit has changed little since its introduction in 1998.
There are 3 basic settings for the type of distortion:

1. T gives the typically “musical” effect found with triode valves and is good for just “warming up” a sound,
2. P1 means that the “distortion” valve is switched to Pentode mode to add odd harmonics which make the sound more aggressive, but retaining that valve character,
3. P2 is the “No Holds Barred” setting and is very unusual way of configuring an unusual valve, even giving an extra octave at higher bias settings.

The Bias control varies the current through the “distortion” valve (6AS6 type) and this current is shown on the milliameter. At low current the Vulture is “starved” and the sound is inclined to be thinner and “break up” easily. High current and the Vulture is over-fed and becomes quite fat and
bloated. At medium current (0.25-0.3 mA) it distorts least, and this is the best setting for just “warming up” a sound. When the Vulture is over-driven, the meter may “twitch” and this gives a good indication of how drastic the distortion is.
The Low-pass filter has a 12dB/octave slope and will remove unwanted frequencies above 6 or 9 kHz (selectable) so as to make the sound more “rounded”.
The Drive control and Overdrive switch give the user ample control over the amount the input signal is boosted before it hits the 6AS6 valve.
The Output Level controls the amount of signal going to the output valve. This control should be set at 8 + for low distortion and turned back when Drive is increased for more distortion, except when P2 is selected.
The Bypass switch completely bypasses the unit so that the Culture Vulture’s effect can be accurately compared to the original.