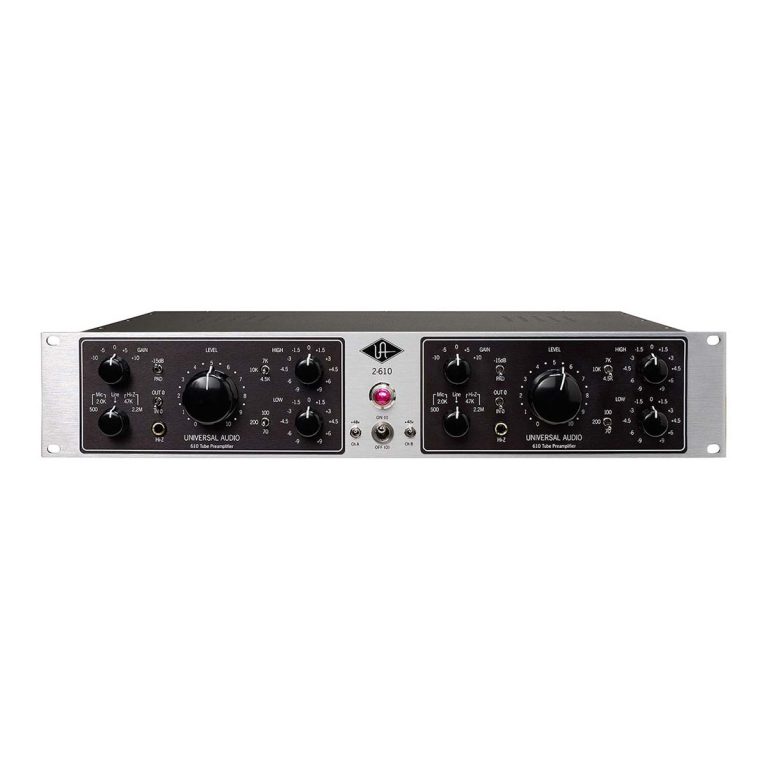 € 2.037,00 For European customers, please select your country to view the correct price including vat

The Universal Audio 2-610s is a two-channel tube microphone preamplifier based on the legendary Universal Audio 610 modular console. Third in the Universal Audio Classics product line, the 2-610 follows the 1176LN Limiting Amplifier and Teletronix LA-2A Leveling Amplifier in our commitment to authentic analog recording technology.
Designed by Bill Putnam, the Universal Audio 610 was among the first modular recording consoles. Early Universal Audio consoles were used in all of Putnam’s studios including Universal Recording in Chicago and United Western in Los Angeles. Many prominent engineers such as Bruce Swedien began their careers in these studios with this classic rotary knob console. The UA 610 was particularly well noted for its preamplifier, and has left its mark on countless classic recordings from Sinatra to Pet Sounds to Van Halen to LA Woman.
We carefully modeled the UA 2-610s after the microphone amplifier section of the 610 console. Unlike many vintage “style” mic pres, the 2-610s is true to the design of its predecessor. Our expertise in analog design translates into a classic tube preamplifier with all of the character of its vintage predecessor, yet designed for the requirements and rigor of the modern studio. We’ve taken great care to preserve the quality and character of the original, while adding functionality with more boost/cut settings, phantom power, direct inputs and impedance controls. The Universal Audio 2-610s Mic Pre is the perfect tool for tracking and ideal when used in conjunction with a Universal Audio compressor such as the 1176LN and Teletronix LA-2A. Whether you’re running pure analog or seeking to enhance your digital audio workstation, the 2-610s will bring classic tube character to your recording.